AFTER THE PANDEMIC : SOCIALISM OR BARBARISM? 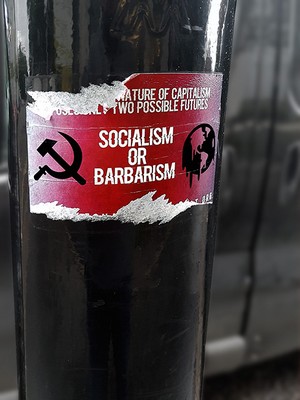 The talk is about how New Zealand will eventually extricate itself from the coronavirus pandemic. But what will it be extricating itself to? It could be a further descent into an even more brutal form of neoliberalism or it could mark the beginning of the fight for a more equal and just society.

A DISCUSSION has tentatively begun about how New Zealand extricates itself from the dire circumstances of the present coronavirus pandemic. Whether or not you support the Labour Government's present elimination strategy, there is a common assumption within the political establishment  and its courtiers in the mainstream media that we will, one day, be entering a world that looks and behaves pretty much like the one that entered the pandemic. There has just been a slight interruption and now normal service will resume.

Of course people like me are hoping that the coronavirus might lead to a revival  - a resurgence even - of progressive  politics and a decisive move away from the  neoliberal capitalism that has prevailed for over three decades. But while an American progressive journalist like Eric Levitz can write in New York magazine that the pandemic  has 'expanded the spectrum of imaginable futures and political possibilities...And some of those possibilities have been a sight for sore socialists’ eyes,'  we're living in a New Zealand where the Green Party isn't even prepared to back a Green New Deal for the country because it is at odds within its continued support for so-called 'market environmentalism'. Apparently even a pandemic isn't enough to shake it from its complacency.

But while people like Naomi Klein and Alexandria Ocasio-Cortez believe that the precarious position that the world finds itself in compels us to move left and towards democratic socialism, we also can't be confident that we will. In New Zealand the enemies of democratic socialism do not all reside on the right. There's a depressing number of them  who are loyal to a weak liberalism that extends no further than supporting Labour - and bugger the consequences for the working class they claim to represent.

Rosa Luxemburg warned us that the choice was always going to be either socialism or barbarism  and the descent into barbarism remains a real possibility. As Naomi Klein has observed the pandemic could see us 'catapulted backwards to a more brutal winner takes all system.'

Klein rightly says we must resist a return to what could only be 'the status quo, but worse'.

'Are we going to accept pre-COVID normal only much diminished? The fact is, we're not 'all in this together as government leaders have often claimed. If you were disposable before, you're sacrificial now.'

The pandemic compels us to fight for the kind of fundamental change encapsulated by the Green New Deal. But if the New Zealand left abdicates its responsibility to fight for such change in order to support the re-election of a neoliberal Labour Party then it deserves to be condemned in the harshest terms.

The challenge we will face when this pandemic enters a 'manageable' phase is to wrest back control from those who have taken advantage of this crisis to increase their power and wealth. It is not a time to utter gutless platitudes about Labour being preferable to National. That is simply support for the status quo. We simply cannot go back to the way things were, pre-virus. The only way forward is through a fundamental transformation of our economy and our political system based on the policies and principles of the Green New Deal.