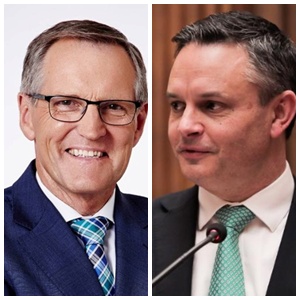 JAMES SHAW does not deny the seriousness of climate change and the threat it represents to life on the planet.

He has also acknowledged, on occasions, that the Government isn't doing anything like enough to combat it. In 2019, when 180,000 people demonstrated throughout the country demanding urgent action, the Climate Change Minister conceded that the Government had to do more. And after Greta Thunberg criticised New Zealand's lousy track record on carbon emissions this week, Shaw admitted that 'she had a point'.

In an article for Spinoff  this week, Shaw provided his view on the environmental crisis that the world confronts and observed : 'There are no excuses now. No time for half measures. No room for marginal improvements. This is it. Time to accelerate efforts; to meet the scale of the climate crisis with the urgency it demands.'

Although Shaw sounds like he's issuing a call for the kind of radical action that is required to overcome this crisis, he actually isn't. The problem is that nowhere in his article does Shaw identify our present economic system as the beast we need to defeat if we are have to any chance of winning this fight. As he always does, he identifies the symptoms of the crisis but never the real cause.

This is because Shaw remains in a seemingly terminal embrace with the very beast that is chewing up the planet. Even as a growing body of political and scientific opinion points the finger of blame at our present economic system, Shaw continues to harbour liberal delusions of a 'green capitalism'. So even when we know that one hundred corporations have been responsible for 71 percent of global carbon emissions since 1988, Shaw still stands up in Parliament and declares that its 'people' who are responsible for the planet warming up. That he can get away with this nonsense highlights just what a grip market ideology has on our present set of parliamentary politicians.

Such is Shaw's continued mistaken belief in 'market environmentalism' is that he thinks that capitalism can actually come to the aid of the planet. Apparently the ceaseless accumulation of profit will somehow temporarily cease because Shaw thinks that business  'can step up and take collective action.'

While we might decry and oppose the opinions of those who seek to deny the reality of climate change they are still the opinions of a fringe minority. They are the people, in New Zealand's case, who gravitate around climate change denialists like Magic Talk talkback hosts Peter Williams and Ryan Bridge - and Sean Plunket before he fell out of favour with Mediaworks.

But much more dangerous is the kind of climate change denialism that James Shaw represents. British Labour MP Zarah Sultana identifies it as an ideology 'that does not deny the science: it denies the politics. It pretends that tweaking the system here, or modifying it there, is enough to avert disaster.'

The Green Party recently joined the Global Alliance for a Green New Deal. But while fellow co-leader Marama Davidson is listed as one of its founding members, it has been James Shaw who has, domestically, stepped in front of the Global Alliance and portrayed it as something it isn't.

While I remain to be convinced by the Global Alliance's commitment to radical change, its founding statement does say that 'the dominant economic system in the vast majority of the world is designed to pursue economic growth at any cost' and that it seeks to 'redesign economies so that never again can so much be hoarded by so few'.  But Shaw, in response, talks only of creating  a low carbon capitalist economy and even goes as far as to the say that the neoliberal 'reforms' that commenced in the 1980s have 'undoubtedly brought with it many benefits.'

Its clear that the liberal remedies that leave in place the underlying structures of the capitalist economy in place have not worked. But these are the policies that Shaw still favours and the Labour Government continues to pursue. When its clear that meaningfully responding to climate change requires that we break every rule in the free-market playbook - and do it urgently - James Shaw and the Green Party he co-leads still want to continue to play by those rules.

Note: Interestingly the Labour-friendly Spinoff  appears to agree with Shaw's explanation for climate change, describing it as 'human induced'.