NEOLIBERALISM IS SPREADING THE VIRUS 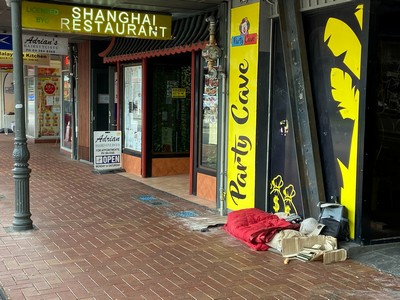 It's politically convenient to blame South Auckland gangs for the spread of the delta virus. But the real offenders lie elsewhere...

WITH MUCH of the media seemingly intent on nailing the gangs in South Auckland as the chief culprits for the spread of Covid 19, there has been less attention paid to the obvious truth that the virus has taken hold in an area of general poverty and social deprivation. But a mainstream media that takes the present  market-led economic arrangements for granted is unlikely to focus on a situation where all of the political parties in Parliament are defenders of a neoliberal 'consensus' that has provided the economic and political environment for the virus to take off.

That 'consensus' has meant allowing unbridled housing speculation that has resulted in rocketing house prices and escalating rents. Last year Leilani Farha, the United Nations former Special Rapporteur on housing, said New Zealand's housing crisis had its origin in housing policy almost exclusively focusing on home ownership 'which, in more recent years and particularly since the global financial crisis, has translated into housing having lost its function as 'home' - as that concept has been replaced with the notion of housing as a speculative asset'.

Time and time again we have heard reports that the virus has prospered in households of ten or more people. On Monday the Health Department reported that one active sub-cluster was made up of just two South Auckland homes but thirty five of the new cases.

It would be a mistake to assume that they just involved members of the same families but, regardless, what we do know is that New Zealand's housing crisis has made the entire country vulnerable to the spread of this rapacious virus. Neoliberalism and a failed market-led approach to housing has produced a 'perfect storm' of low incomes and a lack of affordable housing and the inevitable overcrowding. The virus had been able to spread much more easily because practising  self-isolation in such circumstances is next to impossible. How can there be any self-isolation when at least ten people are living in a typical three bedroom house?

While Auckland may be the country's largest metropolitan area with a population of some 1.5 million it is obvious that the risk of infection is related to household rather than urban density. Otherwise we would have expected the virus to be spreading throughout Auckland rather than being confined to certain low socio-economic areas.

Of course this is not just unique to New Zealand. Last year a report by the Health Foundation in the United Kingdom found that overcrowded  housing had helped to spread the coronavirus throughout England.

'While some have weathered lockdown in large homes with gardens and plenty of living space, others have struggled in overcrowded  and unsafe conditions' said one of the authors of the report. 'Overcrowding is associated with the spread of Covid-19 making self isolation more difficult and allowing the virus to spread through more people if just one person becomes infected.'

But the victims of the market-led approach to housing pursued by both Labour and National governments now face the  possible prospect of being sealed off from the rest of the country like some kind of modern-day leper colony.

'I think this postcode-style lockdown is definitely worth serious consideration."  he told the media  on Monday.

Director-General of Health Dr Ashley Bloomfield has described a localised lockdown  as 'tricky, but it's not off the table completely.' Nor has it been discounted by Prime Minister Jacinda Ardern.

The irony will not be lost by some South Auckland residents that they are being targeted while more economically prosperous Aucklanders have been cavorting on Auckland beaches and where little social distancing has been practised.