THE CONSEQUENCES OF THE PANDEMIC DO NOT AFFECT US ALL EQUALLY 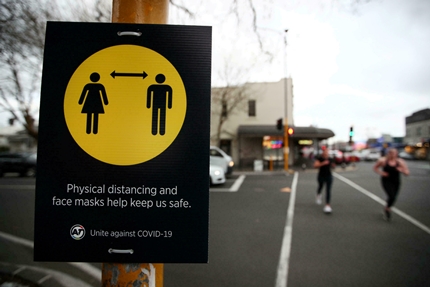 WE USED TO LIVE  in a country where Governments - either Labour or National - wanted us to know that we all benefited from neoliberalism and the 'market economy'. Indeed it wasn't so long ago that the present Minister of Finance was telling us that the 'left wing policies' of former UK Labour leader Jeremy Corbyn would 'not necessarily work in New Zealand'. A definite limitation on public spending and 'fiscal consolidation' (ie austerity) was supposedly a superior alternative to any outlandish socialist polices that Corbyn was peddling.

That era seems to be fading into the mists of time. While claiming that the coronavirus pandemic does not discriminate between rich and poor, the Labour Government has been desperately attempting to shore up local capitalism and to meet the demands of the business sector - once vociferous supporters of a free market ideology that was hostile to any state intervention. What a difference a pandemic makes. The business sector is now pleading for what seems to be almost unlimited public spending to bail it out. It has been socialism for the rich and capitalism for the rest of us.

But the business sector want more. They want to know, especially in Auckland, when the lockdown will end and 'normality' can return. The Labour Government's attempt to placate these demands with a ill-defined so-called 'exit strategy' has not gone down well with business.

Auckland Chamber of Commerce CEO Michael Barnett summed up the general attitude of the business sector this way :

'I’m disappointed and frustrated that policymakers and politicians are not listening to business to develop a fairer, more balanced approach to secure commercial, employment and economic outcomes for the good of all, not just responding to health risks. Extension of the wage subsidy for employees and the resurgence payment for employers to only partially offset weekly overheads does not cut it.'

'This is terrible for New Zealand. The time for courage and committing to a strategy was now. Ardern and her Govt have decided to play pick n mix instead. Not enough freedom and not enough mitigating risk. A complete failure.'

Of course the loosening of restrictions will impact adversely on vulnerable working class communities. The battle against the virus has a class character. Ardern's claim that we, her 'team of five million' are 'all in this together' has always been nothing more than PR gimmickry because it is the 'common people' who are exposed to the most health, economic and social consequences of the pandemic. The consequences of this pandemic do not affect us all equally. It is the working class, of whatever ethnicity, that is suffering the most and will fill the hospitals when the virus spreads. The bourgeoisie is simply concerned with restoring its profit margins.

This is what Green Party co-leader Marama Davidson touched on in her surprisingly critical press statement:

Perhaps Davidson - and her Green Party - will now reflect on just how appropriate it is for them to continue to support a Labour Government that defends a neoliberal status quo that has produced the economic and social environment in which the virus can easily spread. This virus may well be product of nature but the crisis is a product of neoliberalism.

'In a pandemic, a rational person would much rather live in a society governed by the norms of socialism than of capitalism - a society where people rally together to overcome a virus. A society where fear pervades and where stigmatisation becomes the antidote to collective action cannot be the norm.'

The choice that Rosa Luxemburg posed over a century ago remains ours today: 'socialism or barbarism'. To get there and avoid being forced into an even more brutal capitalism, then we must fight for the world we want. One thing is for certain - we won't get to that world by voting for political parties that are simply concerned with defending the current status quo.