LUIS ARCE : 'GREEN CAPITALISM' IS NOT THE SOLUTION TO THE CLIMATE CRISIS 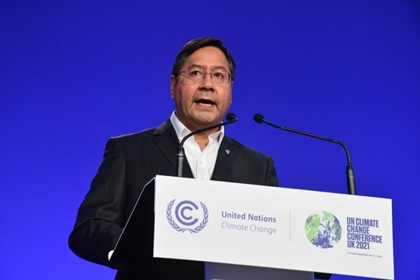 WE CAN BE entirely confident that Climate Change Minister James Shaw will do New Zealand or the world no favours during his attendance at COP26 in Glasgow.

Like he does for the Labour Government domestically, he will join other politicians from the wealthy and industrialised nations promoting false capitalist fixes to climate change and the crisis that confronts us all.

Unlike Bolivia's socialist President Luis Arce who told COP26 that any solution to the climate crisis lies in moving beyond capitalism, corporate-friendly Shaw will continue to insist that the very economic system that is chewing up the planet can be harnessed to save it. It is madness, but it is the madness of an economic system that puts profit ahead of the very planet we rely on for life.

Arce was directing his comments to politicians like Shaw when he said that 'the solution to the climate crisis will not be achieved by more green capitalism, or more global carbon markets. The solution is civilisational change, to move to an alternative model to capitalism.'

Rejecting the model of 'carbon trading' promoted by James Shaw, the Green Party and the Labour Government, Arce said that 'developed countries are promoting a new world recolonisation process that we can call the 'new carbon colonialism,' because they are trying to impose their own rules of the game in the climate negotiations to continue feeding the new green capitalist system, while pushing developing nations to accept these rules of the game without any other options.'

Of course James Shaw is only allowed to have a platform for his regressive views because he is permitted to peddle them with the support of his parliamentary colleagues and the majority of the Green Party membership.

Last year the other Green Party co-leader Marama Davidson, who largely takes a backseat to Shaw, said in her party's annual State of the Planet speech that climate change, environmental degradation and social inequality are "deliberately perpetuated to benefit a few at the expense of the many, and at the cost of our planet.'

Given that she has tamely acquiesced to Shaw's support of what Luis Arce's calls  the 'new carbon colonialism', Davidson's words now ring very hollow indeed.