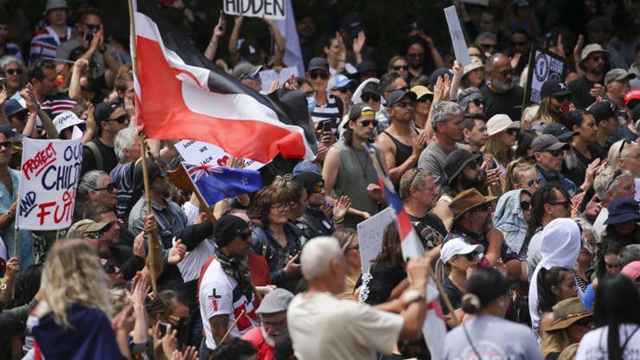 WHILE IT WAS portrayed by the mainstream media as an anti-vaccination protest, the demonstrators who marched on Parliament on Tuesday were not all ant-vaxx. Some were simply opposed to mandatory vaccination, others were opposed to the use of lockdowns. However the media seemed determined to pigeonhole the demonstrators as part of a loony fringe, whose views did not have to be seriously considered.

That message was reinforced by media reports of white supremacists mingling among the protesters, even though there was also a large contingent of Maori protesters as well. Some Maori even performed an impromptu haka. There were Maori sovereignty flags flying in the wind too.

There were also claims that there were QAnon-type conspiracy nutters present. The evidence for this claim though seemed largely based around a few protesters wearing Donald Trump face masks and MAGA baseball caps. Some of the MAGA caps read 'Make Ardern Go Away'.

I also saw a placard that read 'Bring Back Tangy Fruits'. A new candy-based extremist group?

But the idea that the demonstration consisted largely of unpredictable right wing crazies was further reinforced by the Speaker of the House, Trevor Mallard. He ordered a complete security clampdown around Parliament. Maybe he had visions of the demonstrators storming Parliament the way demonstrators did on Capitol Hill in Washington.

In the end, the demonstration was entirely non-violent - although one journalist, venturing forth from the safety of the offices of RNZ, tweeted that she felt 'intimidated' by the protesters. But feeling uncomfortable around protesters you are unfamiliar with does not a riot make.

In the end the only 'incident' that occurred was when a couple of protesters thought it would be a good idea to pull down a barrier. They were immediately prevented from doing so by other demonstrators.

With the media obviously on her side, Prime Minister Jacinda Ardern was able to snottily dismiss the protesters and their concerns. 'What we saw today was not representative of the vast bulk of New Zealanders.' she decreed from on high, in her ninth-floor Beehive office. No one from the media felt that they had any journalistic responsibility to question Ardern  about her big claim. Why? Because they agreed with her.

So, writing for Spinoff, Toby Manhire has claimed that the demonstration 'brought to the surface nasty and violent sentiments that could, unchecked, turn into something awful.' Something awful? The beast that Manhire couldn't quite bring himself to name is probably some kind of proto neo fascist movement. Maybe he should of just labelled the protesters 'deplorables' and left it at that. 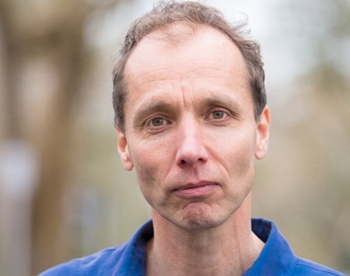 Also writing for Spinoff, Nicky Hager has backed up Manhire's commentary alleging that the demonstration owed its inspiration to Donald Trump and that he 'suspected' that 'the  Covid resistance is being actively used by some on the right of New Zealand politics to try to destabilise Jacinda Ardern and the Labour Government.'

What's significant about Donald Trump though is that he was able to win the 2016 Presidential election because he embraced an American working class largely abandoned by the liberals of the Democratic Party establishment.

In New Zealand, the Labour Party long ago shifted from its working-class roots to become a party of city-dwelling, educated, professional-class liberals. In socialist terms, it became 'embourgeoised.' It is now home to liberals like Manhire and Hager who have benefited from the very neoliberal order that Labour continues to protect.

Hager's fear that his Labour Government is at risk of being destabilised won't carry weight with the woman who posted on Facebook that she was protesting about 'the rising cost of everything'. Or the guy who wrote that he was angry about a Prime Minister who had 'broken all her promises'. Maybe he was talking about her failure to introduce a capital gains tax. Or eliminate child poverty. Maybe he thought she was going to do more about climate change.

But because people like Manhire and Hager only ever converse with people with similar views as their own, they completely failed to recognise any of the genuine grievances that drove the demonstration on Tuesday.

Now they just want to protesters to return from wherever they came from, never to be seen or heard from again - and let 'proper people' run the country as they see fit. The false 'progressivism' of commentators like Manhire and Hager does little to conceal their support for a Labour Government that continues to defend neoliberalism. Many of the folk demonstrating on Tuesday were protesting about the damaging impact that very neoliberalism has had on their lives. But the liberal elite just aren't listening.