COP26 WAS A FAILURE - AND SO IS JAMES SHAW 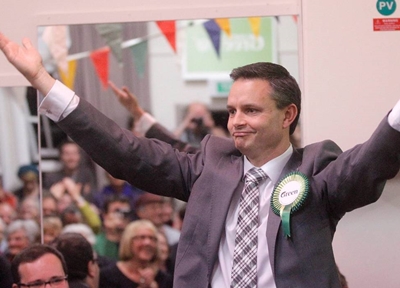 After participating in the failure that was COP26, Climate Change Minister James Shaw has claimed that New Zealand's climate polices are an example for the world. Shaw's bluster hasn't convinced Climate Action Network International who have told New Zealand to 'do the right thing and stop the greenwash – and skip the spin cycle while you’re at it.'

CLIMATE CHANGE MINISTER James Shaw returns to New Zealand after participating in the abject failure that was COP26. The 'pledges', which are not binding, will not limit the global temperature rise to below 1.5c. Despite politicians making grave statements about COP26 being the last real opportunity to effectively tackle climate change the politicians could not even agree to the phasing out of coal use and of fossil fuel subsidies. Instead they agreed to a 'phase down' which means they will do nothing. Now we're being told that the world must act before its too late... at the next COP. And on it goes.

The pervading sense of inertia, driven by a desire to protect corporate interests, was all too apparent.

Having steadfastly ignored the some 150,000 people who demonstrated outside COP26, Shaw blustered that 'it was well past time to move from talk to action in addressing the global climate emergency.'

That's was a bold statement for James Shaw to be making especially after, on behalf of New Zealand, he won a Fossil Award for refusing to update and detail its national contribution to constraining global temperature rises.

Awarded by Climate Action Network International, it said that the New Zealand Government liked to 'give off the ‘greener than thou’ vibe at the drop of a hobbits hat.'

'There is precious little time left and we need to turn up the heat on countries not taking their domestic emissions reduction roles seriously. Lead by example Kiwis, do the right thing and stop the greenwash – and skip the spin cycle while you’re at it.'

As to be expected though, James Shaw isn't listening. He also blew smoke about how 'New Zealand will continue to lead by example here, and show the world what meaningful, ambitious and lasting climate action looks like."

But, as we all know, Shaw's idea of meaningful and ambitious climate action is to be appear to be doing something when you are actually doing next to nothing. The Government intends to halve its carbon emissions by 2030 by purchasing carbon offsets. As much as two thirds of the reduction is estimated to be coming from carbon trading.

What COP26 has demonstrated- again - is that we cannot rely on our so-called political 'representatives' to do the right thing by the planet. As former UK Labour leader Jeremy Corbyn said in a recent article : ' we cannot rely on weak politicians running a system that rewards profiteering at the expense of the public good....I will make a simple point: our future depends on us taking power into our own hands.'

He went on to say: '...the climate emergency is a class issue. It punishes the many and is driven by systems built by the few. Only a huge redistribution of power can prevent the climate crisis from deepening — and build a better world from what follows. Often, the situation seems bleak. But when we come together, we have the ideas and the power to change the world.'