THE MORE THINGS CHANGE, THE MORE THEY REMAIN THE SAME 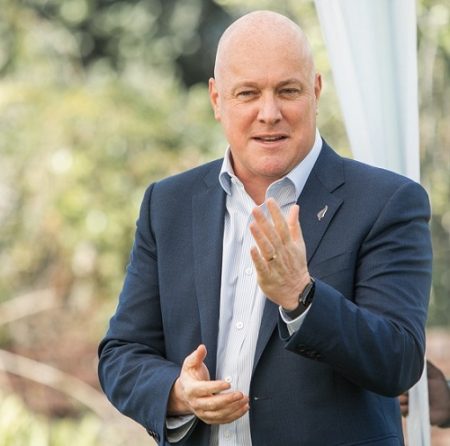 Christopher Luxon wants 'to work for all New Zealanders', while Jacinda Ardern is apparently working for her 'team of five million'. Welcome to Centrist Central...

As the main parliamentary parties have danced together to what they perceive to be 'the centre' of New Zealand politics, there has been an inexorable convergence of policy. It is little wonder that so many of us no longer vote when we are presented with no choice but 'more of the same'.

So, while the media have got all excited about National's change in leadership, it represents little more than the party doubling down on its centrist credentials. Luxon talks of 'working for all New Zealanders'. Close your eyes and you can hear Jacinda Ardern talking about her 'team of five million'. Both political leaders are deceiving us about who they really represent but being a centrist politician means never having to be honest - as long as you are up for a few selfies.

In his opening salvo as National leader Luxon said 'If you are one of the 413,000 voters who moved away from us, my message to you is: From today, National is back.'  The battle of the centrist political leaders is on. Excited yet?

It is a measure of the similarities between the two main parliamentary parties that Labour supporters have been reduced, to among other things, attacking Luxon for being a conservative Christian, a owner of seven properties and a former CEO who wants to run New Zealand as a business. And he's bald. Sorry, no-one's said that - yet.

I would of thought attacking someone's faith could be construed as 'hate speech' and, anyway, Luxon isn't the only Christian in Parliament. Indeed Prime Minister Jacinda Ardern is an ex-Mormon - hardly the most liberal of faiths - and its stretching the bounds of credibility to say that her politics have not been influenced by her former Mormon values.

Similarly Luxon isn't the only multiple property owning politician in Parliament. He owns more than most agreed, but is his crime that he owns more than one property or just that he owns too many houses? After all, as of May last year, the Labour Party had twenty-five MPs who own two or more properties. It also had three MPs with significant interests in blocks of Maori land. But I haven't heard a lot of wailing from Labour supporters about this.

It is also worth noting that Christopher Luxon has prospered financially because Jacinda Ardern succumbed to pressure from the propertied class and declared a capital gains tax would never be introduced while she was Prime Minister. Luxon made more in tax-free capital gains from his seven properties in the eleven months of this year than he made in his best year as Air NZ CEO.

And attacking Luxon for being a former CEO who wants to run New Zealand as a business is puzzling given that this Labour Government has bent over backwards to assist the business sector. As business commentator Bernard Hickey has observed: 'So it turns out the Govt's Covid response will end up giving $20b in cash to businesses & printing $55b to pump up asset values. Asset owners are now $872b better off, including an extra $45b in cash.'

While Christopher Luxon's election as National Party leader has given the chattering class something to talk about amongst themselves, away from the parliamentary arena such horse trading can only generate further cynicism and disillusionment from the growing slice of the electorate that won't be fooled anymore.

Thirty years of neoliberal rule has taught people that the more things supposedly change, the more they remain the same.