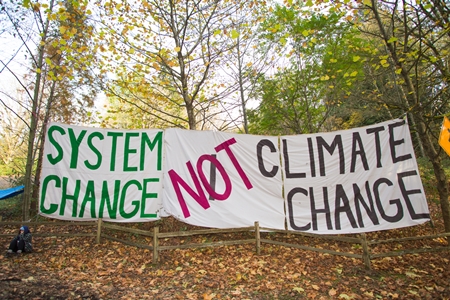 The climate change crisis is upon us but the Labour Government, backed by the Green's, continues to plan for slow, incremental change. But it's just too late for that.

DESPITE THE Labour Government attempting to talk up its Emissions Reduction Plan, it would be fair to say that the general response has been one of disappointment and frustration. The criticisms have ranged from it being 'timid' to being 'weak and too slow' to 'it doesn't go far enough'. And it is indicative of the garbled political times that we live in that it has been National Party leader, Chris Luxon, who has accused  the Labour Government of engaging in 'corporate welfare'. He says that the corporate sector should pay for its own carbon emission schemes instead of it being funded with public money. I suspect that most of the financially hard-pressed public would agree.

I was going to provide my own critical response. But when I had already written half a column or so it dawned on me that I was basically repeating myself. Over the years I've written many critical responses to this Government's inadequate climate change policies and its got to the stage that its difficult not to repeat myself, albeit arranging the words differently. If I was being lazy I could probably put together a column cobbled together from other columns. A cut and paste job.

The problem is that we can never expect this Labour Government - or any of the other present parliamentary parties for that matter - to deliver a realistic and substantial plan to fight climate change. That's because they are all constrained by their loyalty to market interests. Like deranged cultists, they are all still committed to praying at the altar of 'the market'.

To overcome the crisis that climate change confronts us with also means overcoming neoliberalism. But we live in a country where mainstream politics has shunted so far to the right that even our Green Party won't promote a Green New Deal for New Zealand because it cuts across corporate interests. It prefers to delude itself that there really is a green capitalism, Virginia.

When the call from the public is for fundamental change - for system change not climate change -  the response of our politicians is to shrug their shoulders and carry on tinkering with the very economic system that is eating up the planet. The pursuit of even more growth and even more profit will kill us all in the end. Our world is built on the principal of ‘perpetual economic growth’, a system that can’t possibly be sustainable on a finite planet with finite resources.

The group, called Scientist Rebellion, writes in a letter that 'current actions and plans are grossly inadequate, and even these obligations are not being met. The group believes that in the light of continued government inaction the only alternative is non-violent civil disobedience to expose the reality and severity of the climate and ecological  emergency.'

Perhaps we're at this stage in New Zealand as well because the politicians have failed us. Is it a unrealistic scenario? We should remember how Greta Thunberg's school strikes campaign, launched in 2019, quickly developed into a global movement.

The Labour Government's plan to tackle climate change is so inadequate that even the corporate-friendly Minister of Climate Change is trying to distance himself from it. James Shaw says the Emissions Reduction Plan has a 'Labour hue.' But given his devotion to corporate environmentalism its difficult not to be sceptical about Shaw's claim that neither he or the Green Party are at fault for what has been delivered.

On Twitter his fellow Green MP Julie Anne Genter has agreed that the Emissions Reduction Plan isn't up to much but she has retreated to the position that its '...much better to have this step than nothing'.

Genter's alternative? Vote Green Party in 2023. That's it. That's all she's got. Unless the Green Party starts campaigning for a Green New Deal and starts calling for system change and not climate change, then a vote for the Green Party will achieve exactly nothing.