IF JAMES SHAW IS SHOWN THE DOOR, THEN WHY ISN'T MARAMA DAVIDSON? 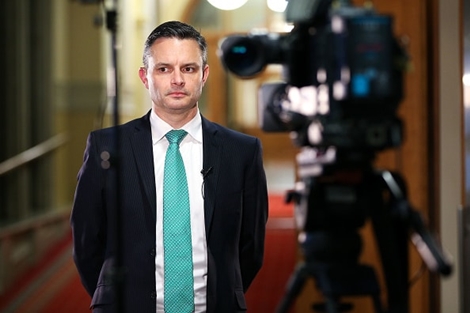 Some members of the Young Green's have expressed dissatisfaction with the centrist politics of James Shaw. But is that unhappiness really driven by Shaw's centrism or the fact that he's male and white?

ACCORDING TO the student newspaper of Victoria University, Green co-leader James Shaw faces the prospect of  another  no-confidence vote at the Green Party's Annual General meeting on July 23-24. Azaria Howell of Salient quotes a Facebook post on the website of the Young Green's that declares that  'a lot of us are unhappy by [Shaw’s] leadership and 'about time we organise and korero to change our co-leadership.'

Many Young Green's have long been unhappy with the Green Party's centrist politics and believe that its MP's are too timid on such issues as climate change.

In 2021, Shaw faced a leadership challenge from Dunedin activist James Cockle. Shaw won overwhelmingly, with 116 of the 140 votes overall – or 83% support from party delegates. Cockle told the AGM that, thanks to James Shaw, the Green Party had turned into 'Labour's little helper'.

However it appears that the Young Green's are happy with James Shaw's fellow co-leader Marama Davidson. This is in despite of the fact that Davidson is as equally conservative as Shaw. She has defended him on several occasions.

In 2019 Davidson denied that the Green's were becoming 'too centrist' arguing that she and Shaw were 'trying to create a framework that's going to survive over multiple decades, that does involve some compromises.'

Given that Davidson has escaped criticism it can be argued that any move against Shaw may well not be motivated by unhappiness with his centrism but it is a convenient explanation for any move against him.

Earlier this year, the Greens changed their party rules and dropped the requirement for a male co-leader. That has opened the door the way for a female duo to lead the party or perhaps another Maori co-leader.  According to Salient 'One member suggested that Teanau Tuiono, a current Green Party list MP, would be an ideal replacement for Shaw.' However its likely that it would be Chloe Swarbrick who would be the frontrunner to replace him.

But with the conservative Marama Davidson still ensconced as a co-leader its doubtful that the election of a new co-leader would be sufficient to break the Green Party from the chains of its suffocating centrism.