CHANGE YOU CAN BELIEVE IN? 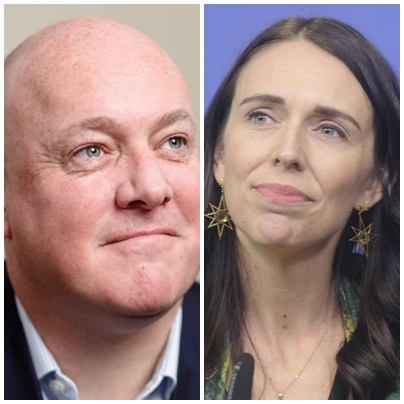 A change in the seating arrangements in Parliament doesn't represent real change.

THE LOCAL body election results sparked a discussion about political change. Although some of us have difficulty picking any real difference between the 'centre right' and the 'centre left', the general consensus, at least in the mainstream media, was that the results represented a shift to the centre right and spelt trouble for the Labour Government and its chances of being re-elected in the general election next year.

A weirdly cackling Prime Minister Jacinda Arden was, unsurprisingly, dismissive of such a conclusion but the opinion polls don't back her up. The September Roy Morgan poll, released October 4, revealed that National's support had risen slightly to 36 percent while Labour nosedived 5.5 percent to 29.5 percent. This was the first poll to show the Labour Government in the 20s and represents a long decline from Labour winning the 2020 election with some 50 percent of the party vote. It hasn't escaped people's notice that its low numbers like this that led to Ardern's predecessor, Andrew Little, resigning the leadership. But with less than twelve months to the general election dumping Ardern would only signal panic and seal Labour's fate. So, for better or worse, they are stuck with her.

But the opposition parties smell blood in the water. National leader Christopher Luxon was quick to comment that the local body election results were convincing evidence that there was a mood for change abroad in the nation. Meanwhile, his probable parliamentary partner, ACT leader David Seymour, has been holding public meetings under the banner 'Real Change'.

But there's change and then there's change. We might be looking at a change in the sitting arrangements in Parliament but that's about all. Under Christopher Luxon, National has doubled down on its centrist credentials and it will ensure, like the Ardern government, that the economic status quo will remain unchallenged. While Jacinda Ardern in 2017 campaigned on the basis that any government she led would be a government of real change and hasn't been, Christopher Luxon isn't promising anything more than being a safe pair of hands. And he's probably already done enough to attract back most of the National voters that were lost to Labour last time round.

Labour supporters are going to have to come up with something better than insisting that Luxon is an evil to be avoided when even a woke RNZ journalist like Guyon Espiner is flattering Luxon: 'Environmentalists say he has impeccable climate change credentials. He's worked with NGOs to halt human trafficking. He's used his corporate roles to champion gender pay equity and the rainbow community. He's learning te reo Maori and hangs out with hipster media types at Rufus Wainwright gigs.' Gosh.

But the centrist politics of the major parties has only served to paint a veneer of 'moderation' over a fundamentally corrupt, exploitative and unsustainable economic system. Disillusioned by the lack of choice available, it's little wonder that a lot of folk have simply given up voting.

In 2017 the Electoral Commission noted that while voting non-participation was prevalent in most developed countries, New Zealand's decline in voting numbers over the past thirty years had been 'particularly steep and persistent'. The two general elections in 2011 and 2014 saw the lowest and second-lowest voter turnout ever recorded since the introduction of universal suffrage in 1893.  In their article Voter Turnout Decline and Possibilities for the Rejuvenation of Politics, Jack Foster and Dylan Taylor observe that the '...This lack of substantive difference between the major parties on economic policy appears to have depressed turnout over time.'

The low turn in this year's local body elections only mirror the low turnout in general elections. If history is any guide, over 600,000 people will not vote again next year.

There might well be a public mood for change abroad in the land but it's not been reflected by the parliamentary parties other than by increasingly hollow rhetoric. We’ve reached a point where we’re going through the motions of democracy, imitating democracy but when in fact the substance is all but gone. Our representative democracy, such as it is, will no longer countenance real change. We truly live in a country where the more things 'change', the more they remain the same.  The question is: What are we going to do about it?