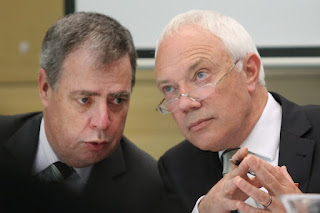 Some things don't change so it comes as no surprise that the unpopular  Christchurch City Council CEO Tony Marryatt - and Sideshow Bob's faithful right had man - is playing up again.

Marryatt said in January - after a storm of public protest -  that  he would decline a $68,000 pay rise. But he still has to pay back  some  $26,000 which he had  already been  paid - and he  shows no indication that he intends  to pay it back anytime soon. Apparently 'Tony', despite being an employee of the Christchurch City Council and, in theory at least , is supposed to  work for the good people of Christchurch , thinks he can do  whatever he pleases and when he pleases  Such is the arrogance of the man.

Interestingly 'Tony's' salary review is  coming up in July and it will be interesting to see, in these tough economic times,  what sort of pay rise Sideshow Bob and co try to foist on the good people of Christchurch.

In my opinion  Marryatt  should get no increase at all but that's as about as likely  Sideshow Bob not  trying to fleece  Christchurch people  into  paying for  a world trip for him and the wife.

The Christchurch City Council gravy train may of  been slowed a little but it has yet to be derailed.

Meanwhile the Christchurch City Council have imposed a whopping a 7.5% rate increase on the people of Christchurch.

Its also unacceptable when we consider that Sideshow Bob and his flunkies want to use that increase to fund a new sports stadium, a convention centre  and a sports complex.