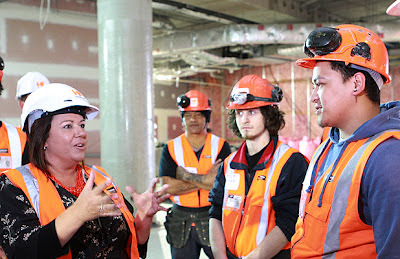 The strange tale of Fletcher Building's '1000 new jobs' for Christchurch.

The Press has proved to be somewhat of a schizophrenic newspaper when it comes to earthquake-related issues.

It has done some  good solid reporting on the myriad of problems confronting Christchurch but, unfortunately, the newspaper also often feels it is obliged to be  a  cheerleader for all things Christchurch, regardless  of the facts.

Last week it reported, in glowing terms and in a front page story, that Fletcher Building  was 'planning' to hire 1000 workers by the end of the year.

Reported  The Press : 'Fletcher Building is seconding a Work and Income staff manager to help it recruit more beneficiaries for jobs in the Canterbury rebuild.'

Not uncoincidentally, the Minister of Social Development was in Christchurch last week. According to a Government press release, Paula Bennett paid a visit  to 'employers working alongside Work and Income to give New Zealanders jobs.'

Bennett said: '...Fletcher Building will give Work and Income access to a vast array of work opportunities within this internationally recognised company.'

It sounds like all hands to the pumps doesn't it or was just a PR stunt designed to make Fletcher and the Government look good?   Something smelt about this story  especially as The Press itself had  also reported that  Fletcher had  so far only employed  26 people to administrative jobs in the past  nine months.

What the newspaper  also chose not to mention is that Fletcher have only been offering the minimum wage - it obviously regards Work and Income as a source of cheap labour.

Fletcher Building's attitude toward its workers was also abundantly evident several weeks ago when it decided it was going to cut painters and plasters' pay rates. The drop in pay has been over 20 percent in some cases.

In response Helen Kelly from the Combined Trades Union commented: “Fletcher is abusing the contracted out employment relationship to profiteer at the expense of the people rebuilding Christchurch. What’s more, the company’s self-interest has led to layoffs and pay cuts that are already delaying repair work urgently needed by the people of Christchurch. '

Two days ago The Press, the same newspaper that had hyped Fletcher Building's supposed '1000 new jobs',  reported that Fletcher's most important  construction partner had  decided  that it no longer wanted anything to do with it.

Said Taylor: '"We did the first job in November 2010 and grew to be one of their biggest contractors. Then we started getting frustrated with where EQR was going. Homeowners were getting upset and it was affecting our brand."

Carl Taylor Homes have been instrumental in establishing Rebuild Me for people opting out of the Earthquake Commission repair project run by Fletcher.

And Rebuild have not been short of business.  Taylor  says they are getting   30 to 40 calls a week from homeowners looking to escape Fletcher.

Fletcher has been desperately trying to stop the 'leakage', even making last minute phone calls to angry and frustrated homeowners who have  decided to give them  the boot.

An insurance assessor told The Press  that a last-ditch Fletcher phone call to those opting out was standard. He said that Fletcher was continuing to lose a lot of business.

Which, of course, begs the question how Paula Bennett's 'internationally recognised company'   can  claim it intends to hire 1000 new workers by the end of the year.

In fact people are continuing to lose jobs. For example, 0800Paint says it has sacked 10 staff and 'put off'  several groups of subcontractors.

0800Paint say work from Fletcher  has 'slowed to a trickle'.

Indeed the Earthquake Commission advised contractors several weeks ago to only expect 'at best one new job a week'.
Posted by Steven Cowan on Sunday, August 12, 2012