WANTED: A DEMOCRATIC REBUILD OF CHRISTCHURCH 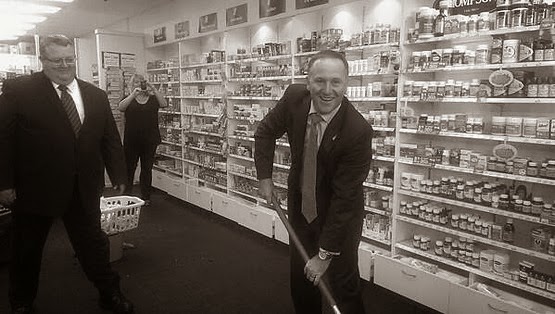 The Government's propaganda about the rebuild has grown  thin with the good people of Christchurch, but where is the political demand for a  new vision for the city? Why is the conversation still being dominated by the political and economic elite? Where  are the demands for a rebuild that isn't market-driven? Where are the demands for a democratic rebuild of Christchurch?

SHORTLY AFTER the devastating February 2011 earthquake, Prime Minister John Key was dropped into the quake devastated eastern suburbs via an army  helicopter. His visit was prompted by criticism that the  working class eastern suburbs were being ignored in a unseemly rush to help other areas of Christchurch.

Key was decked out in a Crusaders rugby jersey, in a obvious attempt to ingratiate himself with angry locals. Key, surrounded by his security goons,  paid a visit to the Bexley power sub-station and  made a fleeting visit to one street and one school.

But it proved to be a bit of a  PR disaster for Key. I wrote at the time:

...Key was collared by one reasonable - but obviously stressed - woman who pointedly told Key that she and her neighbourhood still had no power and they didn't know what was happening. He  had nothing to offer but bland assurances.

And in a testy exchange with a television journalist, Key bristled when it was suggested Civil Defence had ignored the eastern suburbs. 'That's your opinion,' grumped Key, a tactic he often employs when he wants to shut down a line of questioning.

But ever since then  the Government has been on a ideological campaign to win the hearts and minds of the good people of Christchurch. The message has been a persistent one: The Government knows what it's doing, everything is under control, we're on you're side, there might be the occasional hiccup  but Christchurch has a bright future. The market knows best. OK?

Much of the propaganda has come out of the offices of the Canterbury Earthquake Recovery Authority (CERA) . It has bombarded the city with glossy full-colour tabloids, posters, leaflets, newspapers and radio advertising.  And who can forget Roger Sutton's 'pop-up picnics'?

But it hasn't just been CERA  peddling the 'good news' stories. The Press has become somewhat notorious for its cheerleading role. I've wondered if this could partly account for the fall-off in readership the newspaper has suffered in recent times.

And the Canterbury Employers Chamber of Commerce has been strenuously trying to promote the Government's  'feel good' message. Back in 2012 CEO Peter Townsend  claimed that the Christchurch rebuild was 'officially underway'  and that  he' could smell the money' pouring into Christchurch. His comments were  later backed by the editor of The Press, Joanna Norris. In March 2013 she wrote:

Developers are pushing ahead with a flamboyance and ballsiness that is to be admired. Our city is booming. As Peter Townsend, told The Press in October: "You can smell the money."

But in October 2103, Townsend declared  that, in fact,  'the recovery process has only just started'.

Which left both him and Norris with egg on their faces.

But the propaganda continues unabated and in recent times we're been told that 'the rebuild' (of the CBD, it  should be noted)  will begin in earnest this year. Like it was supposed to begin in earnest in 2012 and 2013.

But, it only takes a trip  to the central city, to see how little has been done  in over three years. Indeed Townsend has conceded that only ten percent of the rebuild has been completed - a figure I personally would describe as 'optimistic'

It is tempting to simply say that 2014 will look similar to 2013, but the situation has deteriorated further. There are over 7000 people now classified as homeless, a growing  level of poverty and  rent levels that have climbed  into the stratosphere.  Much of the poverty is being driven by the extortionate rents landlords / the vampires are demanding.

The mounting  problem for the government and its cheerleaders in Christchurch is a huge  chasm has grown between the government's ideological campaign and people's willingness to believe any of it.  The level of cynicism, disillusionment and anger continues to ratchet up.

Christchurch has become a social disaster  zone although these are  words that will not be spoken by the mainstream media because that would  lead to uncomfortable questions about the  nature of this rebuild, whose driving it and why. This is a mainstream media that is incapable of thinking outside the neoliberal box.

In the absence of such an opposition, we are supposed to make do  with an ineffectual Labour opposition that also accepts that the interests of  'the market'  must take priority. This is not, in any way, a  genuine alternative because the market-driven rebuild  has victimised the people of Christchurch  all over again. We've been done over by the quakes and now we're being done over by business interests and neoliberalism.

In 1985 Mexico City was struck by an devastating earthquake. Just a month after the quake over 40,000 residents marched on the government  demanding a 'Democratic Reconstruction'.  As writer and activist Naomi Klein has observed: 'Not only were 50,000 new dwellings for the homeless built in a year; the neighbourhood groups that grew out of the rubble launched a movement that is challenging Mexico’s traditional power holders to this day.'

In the aftermath of Christchurch's cruel flooding John Key popped into Christchurch  for  bit of a stroll and some friendly photos.  He wasn't wearing a Crusaders rugby jersey this time round though.

We truly haven't made much progress since 2011.

I'd like to think we could  take a leaf out of the book of the Mexican people and build a new political force because neither National or Labour offer the good people of Christchurch a way out of their present plight.

Here's my  idea: Christchurch should be reconstructed by and for the very people who have been victimized by the quakes and, now, the flooding.
Posted by Steven Cowan on Sunday, March 09, 2014