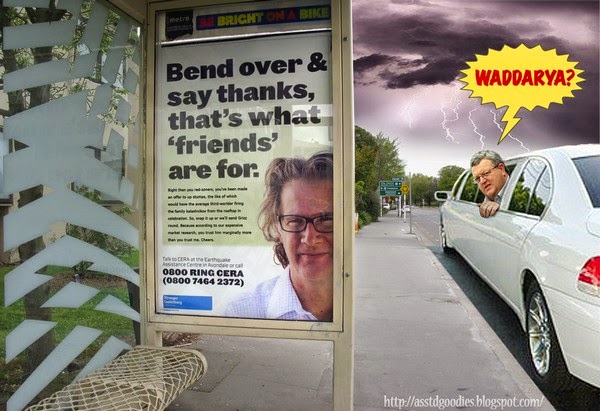 Ali Pugh of TVNZ's Breakfast agrees with the Prime Minister that  departing CERA boss Roger Sutton  has 'done a great job for Christchurch'. But that is not the real story.

It must be so satisfying for the Government  that both TVNZ and TV3 news services are not only incapable of holding  it to account they actually cheerlead for it as well.

It is quite remarkable that Sutton could be lauded in such a way in a city where there are 7000 homeless, where areas in the eastern suburbs where I live still look like battle zones  and where the much hyped  'blueprint'  for the central city  has produced  very little. In  stark contrast there has been building activity in  areas out of the control of Roger Sutton and CERA.

And we can't forget  all the  financially and emotionally stressed  owners of quake damaged homes who have been in hand to hand combat with an unsympathetic and intransigent CERA.

Roger Sutton has done such a great job for Christchurch that he has allowed most of  the central city to be demolished. At the end of 2012  174 of the 585 listed heritage buildings in Christchurch had been pulled down - about a third of them.

Former councillor Peter Beck told The Press that 'It's another example of the way in which the local community, through the council, is being ignored. The view of the people in this city is not being listened to.''

Roger Sutton has been the chief of an organisation that has  deliberately  excluded  the local Christchurch community  from having any real say in the rebuild process.  Any form of involvement has  been little more than tokenistic, designed for national consumption.

In December 2012 former mayor Garry Moore attacked the lack of democracy and the deliberate sidelining of community involvement in the rebuild project. Sutton's  response  was to tell Moore to 'get real'.

'Someone has to dictate the path of recovery' he garumphed. But, apparently, that 'someone' could not be the good people of Christchurch.

One avenue of  community participation was supposed to be the  CERA Community Forum. It was  established not long after the big quake and promptly did nothing. Indeed in 2012, Lianne Dalziel MP and now Christchurch  Mayor, was one of the signatories to a letter to CERA that criticised the forum's lack of action. Said the letter:

"The community forum put in place to allow such consultation has become a farce with Mr Brownlee or Roger Sutton having attended only a handful of times.'

Blogger James Dann  did some checking to see how many times Gerry Brownlee and Roger Sutton attended the forum in 2013. Brownlee did not attend at all, sending Amy Adams instead. She managed to get to just  8 of the 18 meetings. Roger Sutton only showed up twice.

As  James Dann observed: "This whole sorry mess seems to be a good example of CERA’s modus operandi; set up a body to give the impression you are being responsive and engaging (communities! interaction!) then let it wither and die through a combination of bureaucracy and negligence"

But the imposition of a 'top down' bureaucratic approach to the rebuild was set in place the day Roger Sutton unilaterally dumped the Christchurch City Council's plan for the rebuild. This was a plan of more modest aspirations befitting a city of just 400,000 people and that did not include  financially crippling 'anchor projects' like a massive sports stadium and convention centre.  It was the product of the council's 'Share An Idea' campaign which allowed local input into a new vision for Christchurch.

The plan immediately  attracted  an unfavourable response from the corporate sector which wanted it dumped - and that it was what it told Roger Sutton.  He subsequently wrote to then Mayor Bob Parker  to inform him  that the inner city plan was "not  acceptable to the crown in its present form as it did not represent  the requirements or aspirations of commercial property owners or  investors.”

Subsequently an offshoot of CERA, the Christchurch  Central  Development Unit, went ahead and developed the corporate-friendly blueprint we are stuck with now.

The contempt shown for local democracy  displayed by Sutton, representing the interests of the corporate sector, was breathtaking. It was also hypocritical because, at the same time, he was claiming that it was 'important that the people of Christchurch get behind the recovery'.

But, in Roger Sutton's case, that seems merely to involve a disempowered local community standing on the sidelines cheering on the 'movers and shakers' of CERA and big business. Oh, and he organised a few 'pop up picnics' in the eastern suburbs to demonstrate how much CERA 'cared' for the local community.

In her book The Shock Doctrine Naomi Klein observes that  a People’s Recovery  "....would call for new democratic processes, including neighbourhood assemblies, to decide how hard-hit communities should be rebuilt." That certainly is not what we have in Christchurch and Roger Sutton has been central in preventing such a People's Recovery. That is his legacy.
Posted by Steven Cowan on Tuesday, November 18, 2014