"CHRISTCHURCH IS STILL A MESS" 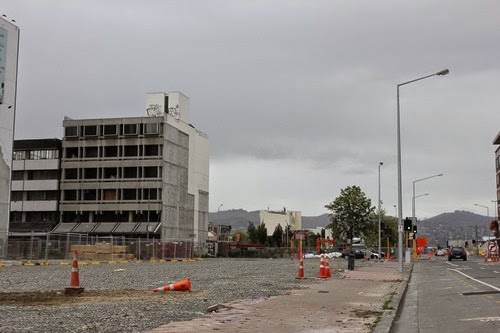 The American news website Vice pays a visit to Christchurch and concludes that it is still a mess. Meanwhile Canterbury Tourism continues to insist that the city is 'vibrant' and 'exciting'.

SOME OF US have never believed the hype about Christchurch being a city that is 'booming'  (Joanna Norris, Editor, The Press). Nor did we ever believe that you could 'smell the money pouring into Christchurch' (Pete Townsend, CEO, Canterbury Chamber of Commerce).

The American-based news website Vice also does not believe the hype. It has published an article by Julian Morgans who concludes that that "Christchurch is still a mess". Which is true. He writes:

Christchurch has become a city of car parks. Around 1,500 buildings have been demolished, leaving a city the size and planning density of Adelaide full of open space. There are still a handful of skyscrapers around, but they're mostly boarded up and condemned. Steel frames hold smaller buildings in place, but with an emphasis on slowing degeneration, rather than reconstruction. That's not to say there hasn't been improvement, but you'd think from the lack of news that Christchurch is back to normal. The truth is that the city has scars, while the inner city is still far from normal.

Morgans seems  to have spent his time in the central city and did not visit some of the 'scenic delights' that are to be found in the  eastern suburbs.

His story has annoyed Christchurch and Canterbury Tourism which told the Christchurch Star that it was 'disappointing that the article had focused on the negative'.

Indeed  Canterbury Tourism  would have much preferred that Morgans had  swallowed the bullshit that it spreads around on a regular basis.

Some readers  might recall that it was Christchurch and Canterbury Tourism which, in 2012, was responsible for a  series of awful  videos which featured  former mayor Bob Parker  and which successfully  avoided showing any demolition sites,any quake damaged houses and any people living in garages and substandard housing.

'The rebuild is ramping up!' declared  Sideshow Bob. Some two years on from Bob's declaration Christchurch still looks like the photo above, one of several published by Vice.