PODEMOS RISES FROM THE GRASSROOTS 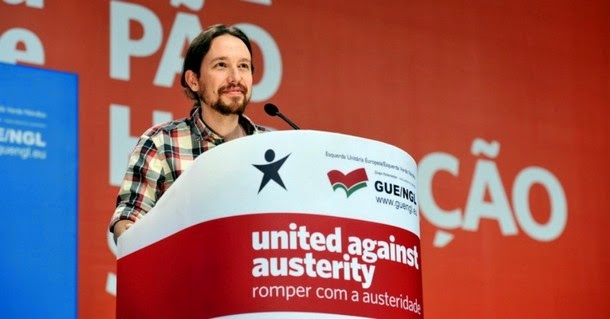 National elections in Spain this year will, if the polls are any indication, see the left wing Podemos Party take majority control. With a determinedly left wing policy platform, Podemos - and Syriza in Greece - may well be pointing the way forward for a European left too often kneecapped by social democratic parties that have surrendered to neoliberalism. By Jon Queally.

THE ASCENDANT  left wing Syriza Party in Greece is not the only progressive party in Europe seeing an increase in its popularity and political might on the basis of a consistent, two-pronged anti-austerity and pro-democracy platform.

In Spain, the fledgling Podemos Party (translated as 'We can') has been surging in public opinion polls since it officially formed earlier this year and now, according to a profile and analysis published in Reuters on Monday, it may be on the verge of 'overturning' the two-party hold enjoyed by the ruling People's Party (PP), led by Prime Minister Mariano Rajoy, and the standing opposition Spanish Socialist Party (PSOE). The fast rise of Podemos, according to Reuters, has forced "the center-right government to veer away from austerity and the left-leaning opposition to scramble for new leaders."

Co-founded by university professor and talk show host Pablo Iglesias, other leftist academics and participants of the Indignados movement that was born in the aftermath of the 2008 financial crisis in Europe, Podemas joined the political fray during elections for the European Parliament in May. Surprising many, Podemos candidates, including Iglesias, won fives seats. Since then, its political impact has continued to grow. Domestically, the party entered national politics by challenging the status quo with a very particular brand of street-savvy politics backed by a grassroots organizing effort.

"Podemos has set up hundreds of local assemblies known as "circulos" across the country, staging unruly weekly meetings at which Spaniards can vent the anger built up during worst economic crisis since World War Two."

"The one thing we all share is the outrage over what's going on in Spain," said Jose Luis Soriano, a 32-year old unemployed computer scientist who has been coming to the circulo in the upscale Madrid neighborhood of Salamanca since the summer.

The Salamanca circulo now has about 500 members. Each week about 50 people attend its meetings in a rented private school classroom. They come from all walks of life and political backgrounds: pensioners, students, housewives, executives.

"I like the fact that they're open to debate, transparent and want to change this rotten system," said Soriano.

Those who attend describe the meetings as an experiment in democracy. There is no leader; members can attend whenever they like and they vote on everything - from organizing a Christmas contest with local shops to choosing who will be their representative, to their policy platform in a local election.

National elections in Spain in 2015 will give Podemos their first real chance at taking hold of large segments of parliament and some polling suggests they could, in fact, take majority control. Like their counterparts in Greece—with whom they regularly communicate and have supported politically within the European Parliament—the members of Podemos have largely based their critique of the ruling class and political leaders on the negative impact that imposed austerity measures have had on the Spanish economy and people, especially the young. Podemos has also lashed out against government corruption and what it characterizes as a "caste system" which dominates domestic politics.

In the wake of Monday's announcement from Greece that new general elections will be held early in the new year, Iglesias tweeted his support for Syriza and their leader Alexis Tsipras, saying, "2015 will be year of change in Europe. We'll start from Greece. C'mon SYRIZA."

As an editorial by the right-leaning The Spain Report noted on Monday, the financial elites and establishment figures of the European Union may not like the rise of Podemos and Syriza, but "They’re coming anyway, and they want to bring radical change not only to the Spanish and Greek systems but to the whole European project."

And that fear among the establishment is not necessarily unfounded.

Speaking with Reuters, Luis Maestre, a  56-year old civil servant who voted for the socialists and the communists for 40 years, said he now wants to run for a seat in Madrid town hall under the Podemos banner.

"The system can only be changed from the inside," Maestre said. "We want to seize local, regional and national power. We want to blow over the political chessboard and move the pieces around."

This article was first published by Common Dreams
Posted by Steven Cowan on Thursday, January 01, 2015