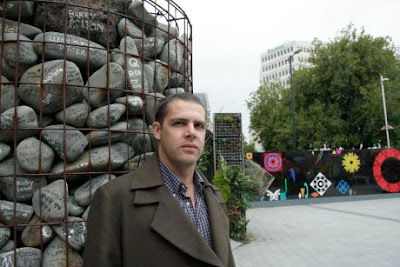 Former Labour Party candidate James Dann is supporting the corporate rebuild of Christchurch - but he once used to criticise it. He's also supporting a mayor and councillors who are favour of the council selling assets despite Dann opposing such sales in the past. In stark contrast he has little that is complimenatry to say about John Minto - the candidate who is opposed to the corporate dominance in Christchurch and who rejects the sale of council assets.

JAMES DANN ONCE USED TO provide some good commentary on the Christchurch rebuild on his blog Rebuilding Christchurch. I read it regularly and Dann gave me permission to publish two or three of his articles on this blog. He also used to write for The Daily Blog at one stage.

In general terms Dann was a consistent and articulate opponent of the corporate approved rebuild that has been imposed on the city by the Government, with support from its local political allies like former mayor Bob Parker.

Dann hasn't been blogging as much of late, because of other commitments, but his lack of posts has also conveniently coincided with the election of Lianne Dalziel as mayor.

Despite the fact that Dalziel is continuing to pursue the same corporate agenda that Dann roundly criticised during the six years of Parker's mayoralty he hasn't felt compelled to direct the same criticism at Dalziel. Indeed, he supports her.

And while he has good things to say about Dalziel, he isn't so complimentary to mayoral candidate John Minto - the candidate who is opposed to the corporate rebuild that has shut out  local people from having any real say in the rebuild of the city they live in. Dann found the time to voice his criticisms of Minto in an article for the Spin Off website last week. He wrote:

John Minto is the answer to the question: What would happen if my well-meaning but ultimately hapless sixth form physics teacher ran for mayor? He speaks with all the conviction and idealism of a serial activist whose views have never been tempered by the realities of actually holding office – something he doesn’t have to worry about this year either. He answers a question about low voter turnout by saying “people aren’t apathetic; they’re disillusioned. Whoever you vote for, you get a corporate agenda.”

Barely a sentence goes by without a dig at “big business” or “the corporates”. He’s clearly not that well versed on some key local issues, such as the cost sharing agreement between council and central government – which he insists is currently being negotiated, despite having been signed off in 2013. Despite this, he is ultimately a well-meaning character who has provided some ideological discussion in a contest that would otherwise have had none.

It's a very negative assessment, to say the least, of John Minto that will only go as far as damning the Keep Our Assets candidate with faint praise - Minto has obligingly provided the mayoral contest with some kind of 'ideological discussion'. In other words he's been a sideshow to the main event of Dalziel being re-elected.

Nowhere in Dann's article is there any real discussion of the polices that Minto is campaigning on.

Dann's snooty comments echo that of Cr Raf Manji, chair of the Finance committee, who patronisingly tweeted that Minto had provided some 'local colour'. Dann is also a firm supporter of Manji.

What's disappointing is that Dann attacks the candidate who, unlike Dalziel , is opposed to the sale of council assets. But in 2013 Dann wrote:

Like a bigoted relative at a family gathering, council asset sales are the unwanted guest that just won’t get the message. Despite wide-spread opposition in Christchurch, including strong declarations from the council and mayor, the government keeps bringing along asset sales to the party,

And only last year he commented:

The ratepayers of Christchurch are being played, both by the council and the government, who are selling off productive assets and running down our social housing stock, whilst refusing to back down over less-than-essential anchor projects such as stadiums, convention centres and sports centres. 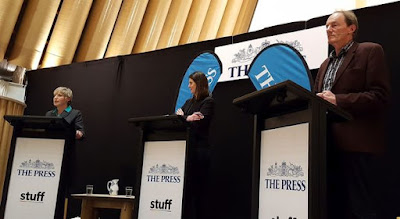 The sale of council assets got off to bad start for Dalziel and her supporters on council after the sale of City Care was abruptly brought to a halt earlier this year after the council only received one unsatisfactory offer for its maintenance and construction division.

The Christchurch City Council wasted nearly a million dollars on consultancy fees. A million dollars was squandered trying to sell a council asset that the local community don't want to be sold and which did not need to be sold. Indeed opponents of the sale, like Keep Our Assets, all said it was lunacy to rush into asset sales when the council's earthquake insurance claim had yet to be settled and the council simply had no idea what its true financial position was.

That argument was flatly rejected by both Lianne Dalziel and Raf Manji.

Yet,after the after sale had collapsed, Manji told the media that the sale of City Care had been cancelled because 'the council's financial position was better than expected". And the reason for that was largely because,admitted Manji, because of a higher than expected insurance payout.

Despite the utter incompetence displayed by Manji during this fiasco, Dann has nothing to say about about him other than to praise his so-called 'professionalism'.

James Dann stood for Labour against Gerry Brownlee in  the Ilam electorate in 2014  and, clearly with political ambitions, maybe he just doesn't want to offend anyone who might help him advance his political career in the future...