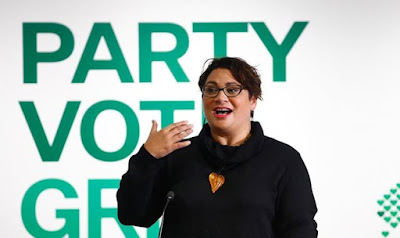 We we are now into day 12 of he corporate media's campaign against Metiria Turei. Meanwhile, the Labour Party goes missing in action...

NEARLY A FORTNIGHT AFTER she revealed she had fiddled the welfare some two decades ago in order to survive and look after her new baby, Metiria Turei continues to find herself the target of a sustained attack from the corporate media.

They have continued a campaign to bury the Green's progressive welfare policy under a mountain of criticism directed at the Green Party co-leader. Turei might want to have a national conversation on reforming the welfare system, but the corporate media don't.

Even RNZ has climbed into her, albeit almost apologetically, with Morning Report's Colin Espiner wanting to know why she hadn't taken advantage of a benefit amnesty that was available at the time.

"I was 23 with a brand new baby. I had no idea anything like that was possible," which was Turei's . reasonable explanation.

However Turei apparently further blotted her copybook by being politically active. Espiner implied there was something dodgy about her standing for the McGillicuddy Serious Party in 1993 and campaigning for Aotearoa Legalise Cannabis Party in 1996. In truth, she probably attended a few meetings and maybe slotted  a few leaflets into postboxes. It could hardly be interpreted as a heavy demand on her time - although TV3 have also slammed her for standing for a joke party like McGillicuddy's.

Turei's real crime, which she has rapidly found out, is that she has failed to uphold the political status quo of which she is deemed to be a representative. She has bitten the hand that feeds her and she must be made an example of.

While they all agree she is a dirty fraudster the argument has also  been pushed out further to suggest that she isn't sincere in her concern for the poor . It is, in the words of  TV3's Patrick Gower  "a calculated political move" to turn Turei into "Aotearoa's Bernie Sanders or Jeremy Corbyn." We are now descending into the murky world of conspiracy theory.

With the media flak exploding all around Turei, it would of been helpful if the Labour Party had rallied to her side. But this, politically, is beyond what Labour is capable of. The best leader Andrew Little has been able to come up with is to describe Turei as "brave" and suggest that Labour are open to discussions about aspects of Work and Income's sanctions regime. But a humane rise in benefit levels is off the table as far as Labour is concerned.

But Sepuloni's silence speaks volumes about a Labour Party continuing to lend its support to a right wing agenda that portrays welfare in a negative light. It is an agenda that views the poor as undeserving and who  can be forced into lives of subsistence and be suitably disciplined when they fail to jump over one of the many bureaucratic obstacles put in their way.