METIRIA TUREI : VOTE FOR ME OR CHILDREN WILL DIE! 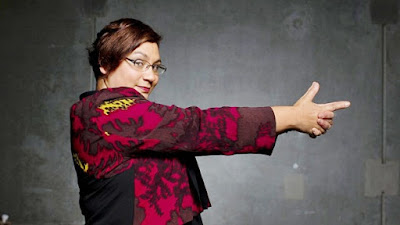 Green Party co-leader Metiria Turei warns that if we don't support Labour and the Green's, then children will die. Is emotional blackmail really all the Green's can come up with?

GIOVANNI TISO IS ONE OF NEW ZEALAND'S better bloggers and the only blogger, as far as I'm aware, who has been invited on to KIm Hill's Saturday morning  show to play his favourite tunes.

That was in 2014, the same year he didn't win best blogger at the Canon Media Awards because the prize was infamously awarded to Cameron "Whaleoil" Slater.

Because he writes from a consistently socialist position Tiso's writing is mercifully free from the usual liberal shibboleths and self-deceptions that often blights the work of other bloggers who consider themselves to be 'progressive'.

Tiso, it would be fair to say, is exasperated with the state of left wing politics in this country. Perhaps "exasperation" is too mild a description but I can well imagine him often thinking why on earth "we still have to fight this bullshit".

Tiso made a reasonable request of Green Party co-Metiria Turei. He tweeted to her: "Could we kindly stop emotionally blackmailing left wing critics of Labour by pleading that people are hurting and need a change of government?'

The response from Turei was appalling. She wrote: "I'm going to ask all of us to band together to fight the real enemy - National. And its because of the 15 kids who will die this winter."

The implication of this comment, displaying both arrogance and insensitivity in equal measure, is that if you are not part of Turei's gang to put her and her parliamentary chums into government, then you are condemning children to death. It is little wonder that Tiso described this comment as "obscene".

He also tweeted: "Our politics simply cannot reduce itself to "Vote for us, we promise to kill 15 fewer children than our opponents." It just can't."

But it is the logical result of a politics that is debased to the level where the only so-called selling point that supporters of both the Green's and Labour have got is that they are somehow less obnoxious than National.

The Green's are rating  12.4 percent in the latest Poll of Polls and with Labour languishing at a disastrous 26.5 percent, Turei's call for people to "band together " to defeat the National government Is clearly falling on deaf ears.

And they certainly are not going to be stiff-armed into supporting Labour or the Green's. 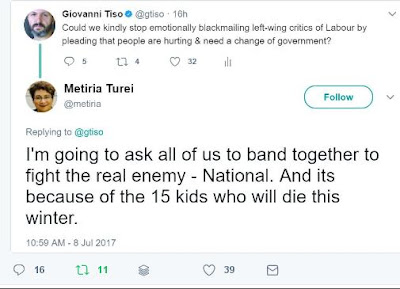 What Turei just doesn't get is that most people, especially the nearly 800,000 people who no longer vote, is that they don't regard time National as the 'real enemy". The real enemy is a political system that doesn't recognise our interests and aspirations but panders to the concerns of our corporate rulers.

While people are increasingly disenchanted with the thin neoliberal gruel they have been served up for the past three decades, Turei isn't offering a change in the menu. Instead she suggests that not supporting her and her other well-paid parliamentary chums will result in more child deaths. Her dark and debased politics is a million light years away from the vision and hope encapsulated in U.K Labour's 'For the Many, Not The Few'.

What makes Turei's comment even more derisory is that this is the same Metiria Turei whose  Green Party happily co-signed with Labour a set of "budget responsibility rules' that will heavily curtail social spending. It appears that her concern for the welfare of children has budgetary constraints.