A LITTLE OF THAT ECUADORIAN RESISTANCE NEEDED HERE TOO.. 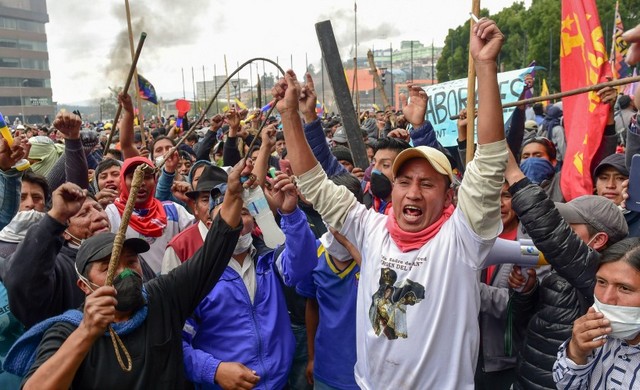 The Labour-led government is sitting on a healthy surplus while the queues at the food banks continue to lengthen. What's changed in the past thirty years? In Ecuador they've grown 'tired of false promises' and that they ..'can't be blind to a government that has done nothing for the people.' Sound familiar?

THE FACT THAT the corpulent Finance Minister, Grant Robertson, is sitting on a $7.5 billion surplus is nothing to celebrate. It's the result of this Labour Government not spending money in areas that really need it- like welfare, education and health. This is a Labour-led government that has put the interests of the few ahead of the interests of the many.

So while the wealthy among us don't have to suffer the indignity of a capital gains tax - which is 'permanently' off the agenda, says Prime Minister Jacinda Ardern- beneficiaries can't expect more than a life of subsistence under her government. Welcome to the world of lousy housing and overcrowding, sleeping rough and surviving on pot noodles.

While Ardern might nod her head sympathetically when she hears food bank volunteer Janet Peagram tell TVNZ's Lisa Davies that she's never seen so many people in need in her 20 years, we know that nothing will change. Just like nothing has changed for the past three decades of neoliberal rule.

In the absence of organised resistance, nothing will change.

In Ecuador, the people are out on the streets protesting the market-friendly policies of the government of Lenin Moreno. His government has now fled the capital of Quito.

Taxi driver Sergio Menoscal, 55, helping to block the streets, told the Guardian '“We’re tired of false promises ... we can’t be blind to a government that has done nothing for the people.”

Perhaps we need a little of that Ecuadorian experience here too...
Posted by Steven Cowan on Thursday, October 10, 2019