THE SYSTEM IS BROKEN 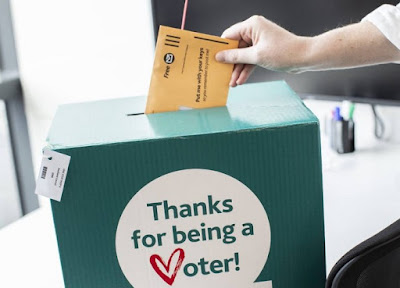 The county is heading for a record low turnout in the local body elections. The system is broken but its you and me who are being blamed for our 'apathy' and our failure to take our 'civic responsibilities' seriously.

THERE IS CONCERN, and even some indignation, that there has been an abysmally low turnout for the local body elections. Even spending some $120,000 on an election advertising campaign, as the Wellington City Council have done, has failed to motivate folk to fill out their voting papers.

As of a couple of days ago the country was heading for a record low turnout, almost a natural conclusion of a historical trend that has seen local body voting numbers drop by approximately twenty percent over the past twenty years.

Of course we could not have an election without the political elites pointing the finger of blame at you and me for not taking our civic responsibilities seriously and filling out our election papers. The Mayor of Whakatane District, Tony Bonne, snorted this week that people don't vote because 'they took council for granted'. Meanwhile the kite labelled 'on-line voting' is again being flown by the usual suspects.

The political establishment wants legitimacy for the political process but it fails to recognise, deliberately, that folk don't vote because they recognise that the political process consistently fails to represent their interests. Barely two years ago a Labour Party leader campaigned on a platform of change and transformation but, once safely ensconced in the Beehive, reverted to type and become yet another representative of the status quo. It's hardly a ringing endorsement for 'representative democracy'.

Here in my local ward in ChrIstchurch my sitting councillor, the Labour-linked Pauline Cotter, wants me to know about all the work she has done for this neglected eastern area of Christchurch. But she fails to mention in her election propaganda that she voted to spend $260 million on a bloated sports stadium for the central city. She fails to mention it because she knows that the sports stadium is viewed unfavourably by many folk out this way, as we continue to grapple with broken roads and footpaths and the continued lack of community facilities. Such deception is also hardly a ringing endorsement for 'representative democracy'.

We can only have a culture of voting and high turnout if we have a political process that encourages such a culture, and we don't. There is hostility and cynicism toward voting because the very political system that wants out votes only ends up keeping us having a real say in government, either at the local or national level. This can't be covered up either by attacking our so-called 'apathy' and 'disinterest' or appealing to our 'civic virtue'.
Posted by Steven Cowan on Friday, October 11, 2019