"BROKE DOWN IN THE FIRST FIVE SECONDS" 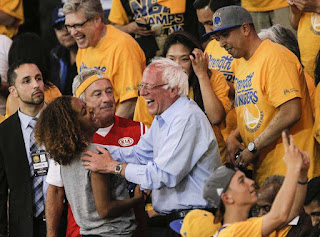 A new independently produced video juxtaposes the negative portrayal that Senator Bernie Sanders receives in the corporate media against the widespread support he has in working class America.

EVEN A CURSORY survey of the American corporate media will reveal that Bernie Sanders, when he's not getting zero coverage, he's getting negative coverage. Nothing has changed since he campaigned for the Democratic Party presidential nomination last time round and the corporate media wheeled in behind the establishment-approved Hillary Clinton.

The independent video by Matt Orfalea is a powerful and moving reply to the corporate media's consistently negative portrayal of Bernie Sanders.

Abby Martin of The Empire files tweeted 'Broke down in the first five seconds. Brilliant work by
@0rf showing the gross disconnect between media elites & actual working class people that are fighting for their lives.'

Actress Susan Sarandon commented : 'This video lifts up so many marginalised voices that are consistently downplayed and discounted by the corporate media. People of colour, women, young people, working people, poor people, and the list goes on. Bernie Sanders hears you.

Released on Friday, the video has already gone viral.
Posted by Steven Cowan on Saturday, October 05, 2019