Home » film » joker » media » A JOKE WITHOUT A PUNCHLINE

A JOKE WITHOUT A PUNCHLINE 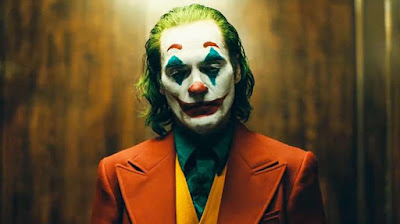 Joker is both bleak and childish...

IN 1993 Michael Douglas starred in Falling Down. He plays a divorced and unemployed former defence engineer who is making his way across Los Angeles to reach the house of his estranged ex-wife in time for his daughter's birthday party. Along the way he has a number of unpleasant encounters which provoke him to react with increasing violence.

Directed by Joel Schumacher (who later directed Batman Forever and Batman and Robin, both awful) ) Falling Down follows Michael Douglas's uptight character as he spirals downwards into violence 'on one bad day'. Twenty five years after it was first released, April Wolfe of LA Weekly wrote that it "remains one of Hollywood's most overt yet morally complex depictions of the modern white-victimization narrative, one both adored and reviled by the extreme right".

While Joker obviously references a movie like Taxi Driver, Joker has similarities to Falling Down. In this case the location is Gotham City (standing in for New York) and Arthur Fleck is a failing comedian with issues. On 'one bad day' this particular 'man on the edge' also lashes out.

While Joker does locate the source of Fleck's violence within the society he lives, in depicting the world as essentially bad and getting badder, Joker doesn't even hint at any way out of the mess. In the end Fleck engages in nihilistic violence, not far removed from the nihilism displayed by the late Heath Ledger's Joker - who I think is  a better realised character than Joaquin Pheonix's. That said, Pheonix, like Ledger, will probably get the Oscar for Best Actor.

While I imagine people will go searching for it, there is no anti-capitalist manifesto hidden in Joker. This, after all, is still a film produced by the Hollywood studio system. In the end, its politics never extend beyond suggesting that the world is awful and the people in it are awful as well. It is, to say the least, a downbeat conclusion and also a wrong one. While the left says that there is still a world to win, Joker suggests that is no way out of the gutter of late capitalism.  In the end, Joker is both bleak and childish. Or should that be clownish?