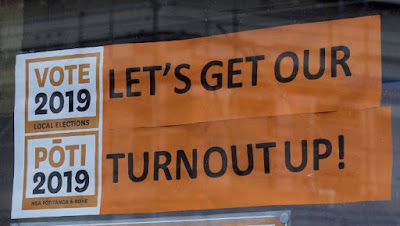 There might be some new councillors but that doesn't mean there'll be also be a new way of doing politics...

AT THE TIME OF WRITING THE COMMENTARIAT was clinging to a very slight increase in voting turnout to ascribe political legitimacy to the local body elections. But they are clutching at straws. The turnout was still abysmally low. Only some 44 percent of eligible voters thought the elections were still relevant to their lives.

In Auckland, our biggest city, less than a third of eligible voters filled out their election papers. Sitting mayor Phil Goff won with 157,000 votes, in a city of over a million eligible voters.

Just as voters have done at a national level, well over half of eligible voters have concluded that it doesn't matter who they vote for, nothing changes for the better in their lives. Shit continues to happen. Often.

It was less than a year ago that a report from Dr Simon Chapple, director of the Institute for Governance and Public Policy at Victoria University of Wellington, commented that 'Poorer people, welfare beneficiaries, Maori and newer migrant groups are much less likely to enrol to vote and, conditional on enrolling, also less likely to vote.'

Other members of The Commentariat, none of whom are members of the categories listed by Simon Chapple, have pointed to an increase in the number of younger people and women entering local body politics. According to the NZ Herald, approximately 25 percent of our mayors are now women, up nineteen percent from last time, and five of the mayors are under the age of 40.

This is being interpreted as a buckling of the 'old, white and male' regime. This will be important for those who subscribe to middle class identity politics but what it doesn't represent is an overturning of 'business as usual'.

A cursory examination of the supposed 'diversity burst', reveals a drearily familiar politics located squarely on the Labour-National spectrum. No one got elected representing a new brand of politics. No one got elected on a platform of working class politics. No one got elected as a socialist. What has been interpreted as a 'diversity burst' is actually just a bit of a much-needed blood transfusion for the status quo. Will the new crop of local body politician behave differently from their predecessors? No. Will the bureaucracies behind them continue to operate in exactly the same way? Yes.

In the world beyond the plush council offices, people are out on the streets demanding real change. We saw that only recently with the demonstrations inspired by Extinction Rebellion. One of its demands is for the New Zealand Government to cede control of climate policy to a peoples' assembly. Don't hold your breath waiting for any of the new crop of local body politicians to take up this particular demand...