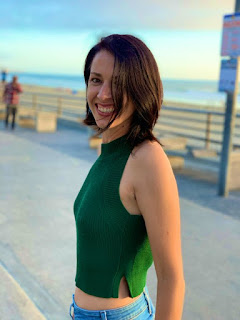 Abby Martin of The Empire Files was prevented from speaking at an American university last week because she refused to sign a contract that would of prevented her from criticising the Israeli government.

LAST WEEK Abby Martin of The Empire Files was prevented from delivering a speech at the University of Georgia because she refused to sign a contractual pledge 'to not boycott Israel'. The event was subsequently cancelled after other speakers declined to participate, in solidarity with Abby.

Since 2014 28 US states have adopted anti-boycott laws, five of them the result of a direct executive order signed by the state governor.

Abby, as readers of this blog will be aware, is a trenchant critic of the Israeli regime and its anti-Palestinian policies. Her recent documentary, Gaza Fights for Freedom, has been widely praised.

There is a concerted campaign, much of it funded by the Israeli government itself, to smear any criticism of Israel as 'anti-semitic'. Donald Trump has described the Boycott, Divestment and Sanctions movement (BDS) as a 'anti-semitic campaign against Israel.' In Britain Labour leader Jeremy Corbyn, a lifelong supporter of the Palestinian struggle, has been constantly attacked by the Israeli lobby for being 'anti-semitic'.

Abby says that the attack on her right to speak is part of a nationwide American campaign 'to protect Israel from grassroots pressure'.

'We must stand firmly opposed to these efforts and not cower in fear to these blatant violations of free speech.'
Posted by Steven Cowan on Monday, January 20, 2020