AFTER BERNIE, NOW WHAT? 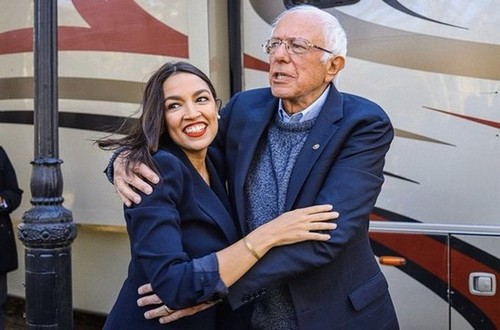 Now that Bernie Sanders has dropped out of the race for the Democratic Party presidential candidacy, it looks like America and the world faces the prospect of another four years of President Donald Trump. But a young woman from The Bronx is waiting in the wings...

THE DEMOCRATIC PARTY establishment have always considered Bernie Sanders to be a threat to its interests and those of corporate America it consistently defends. That vehement opposition runs right through from failed presidential candidate Hillary Clinton describing Sanders as an 'extremist' in 2016 to House Speaker Nancy Pelosi declaring in 2019 that the Democratic Party would never embrace socialism, and would always be a capitalist party.

In 2016 the Democratic National Committee (DNC) was actively campaigning for Hillary Clinton. Chairperson Debbie Wasserman Schultz was forced to resign after a leak of emails revealed DNC staffers favouring Clinton over Sanders, in contravention of the DNC's own neutrality rules. Wasserman Schultz went straight to work as a member of Clinton's inner circle.

Later Donna Brazile, the DNC’s interim chair, revealed that the DNC had signed an agreement with the Clinton campaign. That agreement allowed Clinton to have control over the party's finances, strategy and all the money it raised. In return, Clinton would raise and contribute funds to the DNC's coffers. This has never been denied by the DNC.

In 2020 the Democratic Party establishment chose Joe Biden to be its representative of American corporate interests. But, after some heavy early defeats in the primaries and some uninspiring campaigning, Biden looked like he was on his way out. The Democratic Party establishment quickly rallied to his side. One by one, former rivals pledged their loyalty to Biden. In the case of billionaire Michael Bloomberg he also pledged his money and backroom staff.

Even fellow 'progressive' candidate Elizabeth Warren couldn't quite manage to pledge her support to Bernie Sanders. But now that he's announced he is dropping out of the race, Warren has lavishly praised him. She's tweeted: 'Thank you @BernieSanders , for fighting so relentlessly for America’s working families during this campaign. Your fight for progressive ideas moved the conversation and charted a path for candidates and activists that will change the course of our country and party.' Rumours persist that Warren may well end up being Biden's running mate.

But the Democratic Party establishment have now got the candidate they wanted. If the Hillary Clinton campaign was the tragedy, then the Joe Biden campaign for the White House may well prove to be the farce.

Biden is an establishment career politician who has been on the wrong side of progressive issues time and time again. He has consistently worked to cut social security benefits. He supported the war in Iraq. He opposes medicare for all. He doesn't support the Green New Deal and has close connections to the fossil fuel industry. The list goes on. And then there are the doubts about his ability to consistently string a coherent sentence together.

If Joe Biden is to have any chance at all of defeating Donald Trump then he will have to win over a  left wing of the Democratic Party that seriously dislikes him and the corporate politics he represents. The chances of that happening appear slim. Chances are the Sanders movement will simply sit the election out, just as it largely did in 2016. And a  general antipathy toward Trump won't be enough for Biden  to win in November.

But the future of the Democratic Party isn't Joe Biden. Currently too young to run for the Oval Office, Alexandria Ocasio-Cortez is Bernie Sanders heir apparent. And she will be eligible to run for president in 2024.