THE TROUBLE WITH NORMAL 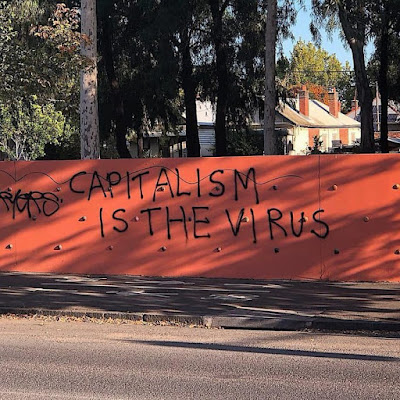 After the coronavirus pandemic is over, do we really want to 'return to normal'? Or do we want something better?

Strikes across the frontier and strikes for higher wage
Planet lurches to the right as ideologies engage
Suddenly it’s repression, moratorium on rights
What did they think the politics of panic would invite?
Person in the street shrugs 'Security comes first'
But the trouble with normal is it always gets worse.
Bruce Cockburn, 'The Trouble with Normal'.

AS WE REMAIN hunkered down in the trenches for at least the next ten days and probably more, talk among the top brass is of an eventual return to 'normalcy'. Indeed the Labour-led Government's bailout of the business sector is based on the need , says Finance Minister Grant Robertson, for business to be 'ready to hit the ground running' once we resume 'normal activity'.

But the economic landscape will look a whole lot different post-lockdown. We are already getting a 'sneak preview' of the damage that has been wrought via the staggering number of people who are now applying for the unemployment benefit and the heavy demand on community services such as food banks. Apparently the Prime Minister's 'tremendous leadership skills' and 'kindness' don't extend to lifting benefits to a level that allows folk to live their lives with a modicum of decency.

While we may not be in a revolutionary situation we, at the same time, don't have to accept that there is no alternative to austerity. We don't have to accept the 'capitalist realism' that any economic and political considerations must all be conducted within the confines of the capitalist system. We can't let the debate occur within the narrow confines of the political elite and its allies among the chattering class.

The question is, what sort of world do we want? Do we really want the kind of world where as journalist Laurie Penny has observed, the ruling elite has argued that 'a certain amount of brutal death is a reasonable price for other people to pay to protect the current financial system' . In short, do we want to keep living in a world that systematically puts profits before people?

Of course these are not new questions and many of us have been asking them  most of our adult lives. But the present urgency of these familiar questions is new. Such questions cannot be replied to with the predictable non-answers of 'vote Labour' or 'vote Green Party'. After being told by these parties of the status quo for decades that there is 'no alternative' to neoliberalism, we have now the opportunity too present such an alternative. I think a Green New Deal would be a good place to start.