THE SOCIALIST POLITICS OF TEEN VOGUE 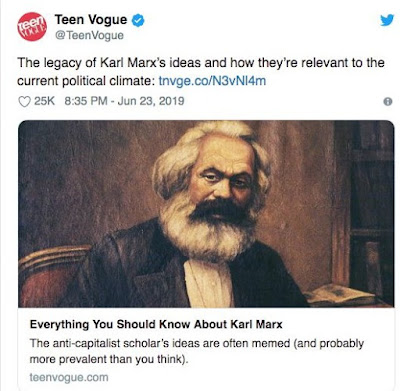 Teen Vogue has combined fashion and popular culture with left politics - and its readers like it.

I'M NOT part of the target audience for Teen Vogue but I do regularly read articles on the website.  Aimed fairly and squarely at young women, it began in 2003 as the sister publication to Vogue. But, after the magazine was unable to halt a steep decline in sales, it was announced in 2017 that the magazine would continue only as an on-line publication. Some predictably thought it spelt the beginning of the end for Teen Vogue.

It proved to be the making of Teen Vogue. While it continues to cover fashion, music and popular culture generally, it is also has also significantly boosted its political coverage. With articles like 'Rosa Luxemburg: Who Was the Revolutionary Socialist and Author?', 'We're Black Women Who want Social Change - We're Voting for Bernie',  Teen Vogue is big and bold in its anti-capitalist politics.

In 'The Coronavirus Pandemc Demonstrates the Failures of Capitalism', Kandit Mallet writes:

'Selling your labour in a capitalist marketplace so you don’t end up on the street is horrible and unnatural, and we shouldn’t have to exist this way. While many of us have long questioned the idea of working our lives away to pad a company’s bottom line, the pandemic has given us a glimpse of what an anti-capitalist society could actually look like. This isn’t to romanticize what is happening — after all, people are gravely ill and dying every day. But if we are to fully examine the crisis for what it is, then we must recognize that COVID-19 is not the only virus that must be destroyed. We also have to confront capitalism and the world that sustains it.'

Born out of the corporate media and still owned by the corporate media, Teen Vogue had gone right ahead and subverted that culture and produced not only something new and cutting edge, but something that articulates the political sensibility of its young audience.
Posted by Steven Cowan on Friday, April 03, 2020