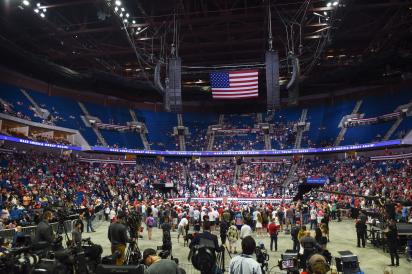 Donald Trump's Tulsa election rally was an embarrassing flop but, in choosing Joe Biden as its presidential candidate, the Democratic Party establishment, hasn't shut the door on Trump winning a second term. Maybe they should of listened to Rosa Luxemburg...

DONALD TRUMP'S Tulsa campaign rally was nothing short of a disaster. He failed to fill the 19,000 convention centre, with the Tulsa Fire Department estimating that there was little more than 6,000 people in attendance. Little wonder that Trump and his acolytes have resorted to blaming protesters and the media for the rally's failure.

Just as worryingly for Trump is that his 'message', such as it is, is increasingly failing to resonate with voters. At the Tulsa rally he pulled out his familiar tricks from his big box of lies, prejudices and bigotry. But even among his hardcore supporters there didn't seem to be quite the same gung ho enthusiasm that marked Trump’s election rallies in 2016.

Donald Trump is caught in a three prong pincer attack that is squeezing the life out of his presidency. His failure to adequately respond to the coronavirus pandemic as well as the surging Black Lives Matter movement has left Trump increasingly isolated. And with the American economy now in a tailspin, Trump has been well and truly exposed as the President of the One Percent.

In these political and economic circumstances the Democratic Party should be confident of retaking the White House in November. Indeed all the polls suggest that Trump is on his way out. That said, the Democratic Party may have to win despite of Joe Biden and not because of him. Ignoring concerns about his ability to stay the course, Biden was chosen as its presidential candidate by a Democratic Party establishment who insisted that the socialist message of Bernie Sanders would only alienate large swathes of an American working class that had been seduced by the false promises of Donald Trump.

It was the Polish revolutionary socialist  Rosa Luxemburg who argued that political tactics and strategy could not be determined by the mood of the day, which are always fleeting and temporary. To insist that you 'always build your footpaths where the people walk' ignored, wrote Rosa, that 'The mass is always that which it must be according to the circumstances of the time, and the mass is always at the point of becoming something entirely different than what it appears to be.'

She elaborated : 'The psyche of the masses like the eternal sea always carries all the latent possibilities: the deathly calm and the roaring storm, the lowest cowardice and the wildest heroism....A fine captain he would be who would chart his course only from the momentary appearance of the water’s surface and who would not know how to predict a coming storm from the signs in the sky or from the depths.'

But the Democratic Party establishment, in choosing the corporate-approved Joe Biden as its presidential candidate, has chosen him on the basis of the monetary mood of the American working class. But this isn't the American working class of 2016. It isn't even the American working class of six months ago. Donald Trump might be down for the count, but he isn't out. And he's got the Democratic Party establishment to thank for that. The Democratic Party might well have been advised to be guided by Rosa Luxemburg’s observation that ‘There is nothing more mutable than human psychology....A leader in the grand style does not adapt his tactics to the momentary mood of the masses, but rather to the iron laws of development; he holds fast to his tactics in spite of all 'disappointments' and, for the rest, calmly allows history to bring its work to maturity.’