Home » jacobin » media » THEY'RE READING OUR SOCIALIST COMMENTARY OVER THERE

THEY'RE READING OUR SOCIALIST COMMENTARY OVER THERE 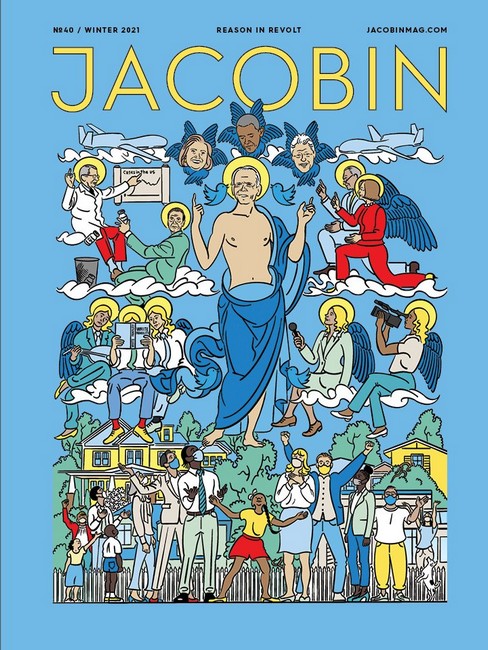 A number of New Zealand writers have been contributing articles to Jacobin. The US based  magazine and website has been instrumental in mapping out a 21st century socialism while in New Zealand much of the 'progressive' commentary  continues to defer to the electoral interests of the Labour Party.

UNION ORGANISER Justine Sachs has a very good article on the centrist politics of Jacinda Ardern and the Labour Government sitting on the Jacobin website right now and its worth a read. Her conclusion that we must build a movement that goes beyond 'Jacindamania' and centrism is one that many people will agree with - although not a lot of the regular contributors to New Zealand websites like The Standard, Spin Off and The Daily Blog.

Sachs isn't the only New Zealand-based writer who has contributed to the US-based Jacobin in recent times. Ben Peterson, a union organiser with FIRST Union in Wellington and with a slightly more favourable view of the Labour Government than Justine Sachs, opines that we can't rely on the Labour Government to introduce progressive reforms without pressure being applied by outside social movements and the left in general. In another article Branko Marcetic  (a contributing editor to Jacobin and who now resides in Canada) writes that while the Labour Government might have been lauded for its handling of the coronavirus pandemic, it has failed to adequately protect workers with 'the rising demand for food banks alone testament  to the pain being felt by Kiwis all over the country'. And in another recent article Aucklander and Phd Student Ti Lamusse criticises the Government's response to the six day protest at Waikeria Prison commenting that Jacinda Ardern's approach to  criminal justice 'is defined by inaction'.

A number of other articles written by Kiwi writers can also  be found on the Jacobin website including a very interesting historical piece by Huw Morgan abut the women who were at the centre of a six month miner's strike in 1912, one of the biggest battles in New Zealand labour history. Morgan comments: 'Often, the role of women is missing from the industrial history of this era.'

Jacobin is an American socialist quarterly, based in New York. The magazine has a circulation of some 60,000 and  the website reportedly receives one million visitors a month and 2.7 million page views. These are the kind of figures that a New Zealand left wing or progressive website cannot possibly hope to emulate so its not altogether surprising that a number of Kiwi writers want their articles to appear on a website where a substantial American and international audience will get to see them.

But's that's not the only reason. The unfortunate reality is that there  are no substantial outlets in New Zealand for the kind of progressive and socialist writing that is on display in Jacobin. Some New Zealand websites are linked to political groups and have a definite 'party view' while other websites, ostensibly progressive, tend to bend their  editorial stance in favour of the Labour Party. In some cases, a website like The Standard is a straightforward cheerleader for Labour.

Spin Off, which also supplies material for the RNZ website, is of a liberal disposition and also views Labour in a favourable light. Think RNZ's 'The Panel' and you will know exactly where Spin Off is coming from.

Meanwhile The Daily Blog has also been traditionally heavily pro-Labour and in recent years has largely been dominated by the pro-Labour opinions of a handful of bloggers, some of whom share a hostility for anything resembling socialist politics. It seems it has burned off most of its more progressive writers who may not be want to be associated with a website that lauds right wing politicians like Willie Jackson and continues to peddle the snakeoil of 'lesser evil' politics. At every election the call goes out from editor Martyn Bradbury for a Labour vote and that's unlikely to change anytime soon.

A relative newcomer, Democracy Project, aims to be a sounding board for a broad spectrum of political opinions but it is not a socialist or left wing website and doesn't pretend to be. But I'm of the opinion that Democracy Project hesitates to give coverage to socialist views - such as they are - in order to not upset its more mainstream contributors.

In stark contrast Jacobin loudly proclaims its socialist and left wing  credentials. The publisher of Jacobin, Bhaskar Sunkara, was once asked whether he thought Jacobin reflected the views of Eduard Bernstein, the founder of a post war social democratic politics that thought capitalism could be reformed out of existence, or was more influenced by the views of Rosa Luxemburg, who attacked Bernstein for abandoning any hope of socialist revolution. 'Maybe more Luxemburg' was Sunkara's reply.

Sunkara has also stressed the importance of a class-based politics, commenting in one interview that 'If you're not focusing on class as your primary thing, then I can't see how you can build an anti-racism or anti-sexism program, unless it means yelling at people and trying to change the ideas that float around in people's heads.'

We shouldn't be surprised that a seemingly growing number of New Zealand's more progressive writers have gravitated to Jacobin, a publication and website more in tune with their own political beliefs. While New Zealand websites seem permanently locked into a politics that can't see beyond the Labour Party, Jacobin has been instrumental in adding a theoretical impulse to a surging American socialist movement. Its breaking new ground while, unfortunately, much of what constitutes the New Zealand left is marooned in a centrist quagmire of its own making and its political commentary tends to reflect that. So, right now, they're reading our socialist commentary...over there.