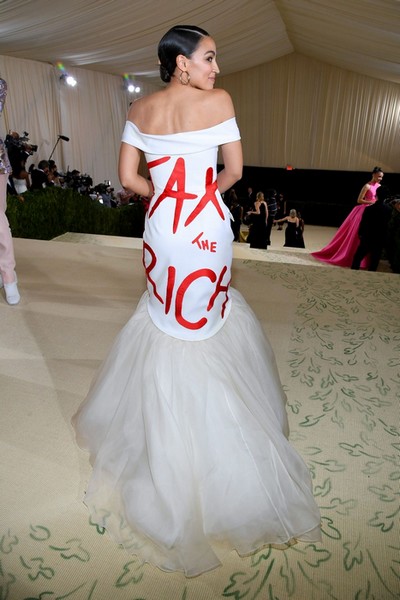 The socialist congresswoman says 'the medium is the message'.

SOCIALIST CONGRESSWOMAN Alexandria Ocasio-Cortez remains the mortal enemy of the American right - and more than a handful of corporate Democrats as well. So her opponents went into overdrive this week when she showed up at the swanky Met Ball wearing a white gown with the words 'Tax the Rich' in red letters splashed across her back. It was accessorised with a matching slogan on her handbag.

The Metropolitan Museum of Art  fundraising gala is certainty not an event attended by 'the great unwashed'.

'AOC wearing this dress at an event full of rich people..this woman has more balls than any man in Congress,' a supporter tweeted.

However her opponents were, inevitably, less than impressed by her subversive fashion.

Donald Trump Jr accused AOC of being a 'fraud' for wearing the gown while 'she's hanging out with a bunch of wealthy left wing elites'.

Florida Republican Governor Jeanette Numez tweeted that 'Only in America where a self-described democratic socialist can wear a $10k 'tax the rich dress', pay 30k for a ticket, and be praised as a champion of the poor. Champagne socialists like AOC are far removed from reality.'

New York elected officials like AOC are routinely invited to attend the event and do not have to pay the price of admission. AOC has also pointed out that the dress was borrowed from designer Aurora James, who attended the gala with her.

AOC told the media that she and James came up with the outfit after 'having a conversation about what it means to be a working class woman of colour at the Met....We said we can't just play along, but we need to break the fourth wall and challenge some of the institutions.'

'The time is now for childcare, healthcare and climate action for all. Tax the rich' she later wrote on her Instagram account.

AOC has long argued that America's wealthy need 'to start paying their fair share of taxes' to underwrite the Green New Deal, a plan to completely reconfigure the American economy. She has suggested that the tax rate should be set at 70 percent - which was also the rate set by presidents Kennedy and Johnson. Under President Eisenhower the marginal tax rate was 91 percent.

America's wealthy elite now pay a rate of 24 percent. It was reported earlier this year that the richest twenty five Americans have a true tax rate of almost nothing. For instance Amazon CEO Jeff Bezos paid $1.4 billion in personal federal taxes between 2006 and 2018 on $6.5 billion he reported as income, while his wealth increased by $127 billion. That works out at a true tax rate of 1.1 percent.

AOC wrote on Instagram that she was accustomed to being 'heavily and relentlessly policed from all corners politically'.

'Ultimately the haters hated and the people who are thoughtful were thoughtful, ' she wrote. 'But we all had a conversation about Taxing The Rich in front of the very people who lobby against it, and punctured the fourth wall of excess and spectacle.'