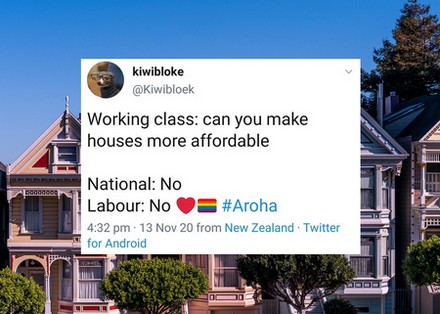 This past week Labour MP Tamati Coffey boasted that he was responsible for the new  bilingual elevators in the Beehive. Meanwhile the Maori Party launched a petition  calling for all English place names to be restored to Maori by 2026. Meanwhile, on planet Earth, working class Maori are struggling under a lockdown that has left many on the brink of the financial abyss....

THERE DOESN'T seem to be a day that goes by without at least one community group warning the Government that lockdown restrictions, especially in Auckland, are pushing individuals and families to the brink of financial ruin and that help is desperately needed. But those warnings have been largely drowned out by an Auckland business class clamouring for ever more money to prop it up during the lockdown and beyond.

While the Labour Government is intent on saving local capitalism, the working class can apparently go and suck eggs. So calls for help from such groups as Child Poverty Action are always going to be ignored  by a Labour Government that thinks that, politically, it can get away with not addressing the issue of widening social distress. Given its support remains relatively steady in the opinion polls, it may well be right.

While it has pushed some money in the direction of under-pressure food banks, Janet McAlister of  Child Poverty Action responded on Friday that increased funding for food banks did not even go close to addressing the fundamental issue of growing financial need. That need that has always been there of course, but the pandemic has only served to deepen the crisis. As Oscar Wilde observed many years ago, charity is not a solution to poverty, 'it is an aggravation of the difficulty'.

Given that working class Maori - and Pasifika - are prominent among those doing it hard, one would of reasonably expected the Maori caucus of the Labour Government to go firmly into bat for the folk it claims to represent. Even though the Maori caucus is thirteen MPs strong - the largest Maori caucus in Labour's history-  we have heard next to nothing from it. Instead Maori Labour MP's appear to have other priorities. This week Tamati Coffey took to Twitter to boast that it was he who was responsible for the introduction of bilingual elevators in the Beehive. Tremendous. The revolution doesn't start here.

While this was dutifully reported by RNZ - which these days treats anything Maori with a nauseating uncritical reverence  - at least Martyn Bradbury at The Daily Blog had the decency to call out Coffey and the elevators:

'The housing crisis, 24,000 on emergency housing wait lists, 190,000 kids in poverty and a yawning chasm of inequality are all screaming for immediate attention and what do we get from this Government? Bilingual elevators'.

If only Bradbury would stop letting himself down by continually running to the defence of Jacinda Ardern who, according to him, is innocent of all charges directed against her. For a self-described 'anarchist' its mad how he can devote himself to someone as dourly centrist as Ardern. But we all know what Lenin said about anarchists...

The problem for the Maori caucus is that taking on the Government and its handling of the pandemic would invite criticism of Labour's neoliberal economic policies that continue to enrich the one percent at the expense of everyone else, including working class Maori and Pasifika. The silence you hear is not a single Maori Labour MP speaking out against neoliberalism and offering a real economic alternative. And yet they continue to moan about the economic inequalities that Maori confront as if its somehow unrelated to their support for neoliberalism. If you go looking for a Alexandria Ocasio-Cortez in the Labour Party or any of the other parliamentary parties for that matter - well, you'll be a long time looking.

The Maori caucus, like the Maori Party, is not interested in pursuing a truly transformative agenda against neoliberalism. It is only interested in achieving what it considers to be an equal footing within neoliberalism. While this might be of benefit to the Maori bourgeoisie that Professor Elizabeth Rata identified several years ago, there are no prizes for working class Maori. They will continue to suffer at the sharp end of capitalism.

'We see no difference between the aspirations of Maori people and desire of workers in their struggles. We seek the support of workers and organisations, as the only viable bodies which have sympathy and understanding of the Maori people and their desires. The people who are oppressing the workers are the same who are exploiting the Maori today.'