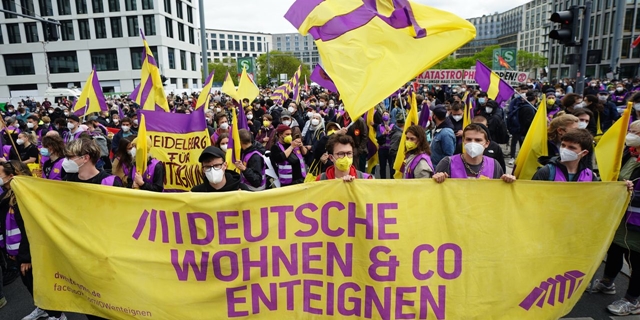 The people of Berlin have voted for the expropriation of some 250,000 privately owned apartments, to be placed into public ownership. The plan is  to bring to an end escalating rents and create a pool of affordable housing. Perhaps New Zealand should also adopt 'the Berlin way' - but don't expect any of our present market-loyal political parties to adopt such a policy.

THIS MONTH BERLIN voted to abolish landlords. Specifically Berliners voted to expropriate residential property owned by major corporate landlords. They are defined as any landlord who owns more than 3,000 properties in the city.

If the expropriation of these properties goes ahead, it would transfer nearly 250,000 Berlin apartments to public ownership using an article in Germany’s constitution that gives the state the power to seize private property in exchange for reasonable compensation if it’s in the public interest.

The referendum passed with more than 56% of votes in favour and 39% against. It was the culmination of a campaign ran by the organisation Expropriate Deutsche Wohnen & Co – Deutsche Wohnen is the name of Berlin’s largest private landlord. This was a grassroots campaign that had, not surprisingly, no support from a political establishment intent on protecting the interests of corporate landlords.

The campaign was a response to the proliferation of real estate corporations in the city, which now own nearly 20 percent of Berlin apartments. These landlords are listed on the stock market and use housing to create more wealth for their shareholders.

Said a spokesperson for the campaign : 'With socialisation, we want to remove twenty per cent of Berlin rental apartments from speculation and enable affordable rents in the long term. No more fat dividends for shareholders that have to be paid out of our rents. No more crowding out of people who can no longer afford their apartment.'

The symptoms of the housing crisis in Berlin will be all too familiar to New Zealanders. Since the 2008 financial crash rents have more than doubled - in a city where some 85 percent of people rent their home. Overcrowding and homelessness is a growing problem.

The result of the referendum is not legally binding and will no doubt be ignored by the elected politicians.

The new Berlin mayor, Franziska Giffey of the Social Democrats, has nonsensically claimed that expropriation would not create more affordable housing. But this view has mirrored the comment of one corporate landlord who has insisted that 'Expropriations do not solve the manifold challenges on the Berlin housing market.'

The result of this referendum may well have demonstrated the intransigence of the German political establishment but it is also a demonstration of what can be achieved by a well-organised grassroots campaign.

It is also yet another reminder that the housing crisis cannot be solved by minor policy tweaks within a market-led framework. What is required is a radical response that demands that housing no longer be prey to property investors and financial speculators.

The housing question may not be resolvable under capitalism but the housing system can still be significantly changed in the interests of ordinary people. The Berlin vote highlights that.

Here in New Zealand though we continue to be trapped by a political parties that are intent on maintaining the status quo and continue to aid and enable the commodification of housing for the enrichment of a few at the expense of the many.