Home » representative democracy » KRIS FAAFOI : HAVE I GOT A DEAL FOR YOU!

KRIS FAAFOI : HAVE I GOT A DEAL FOR YOU! 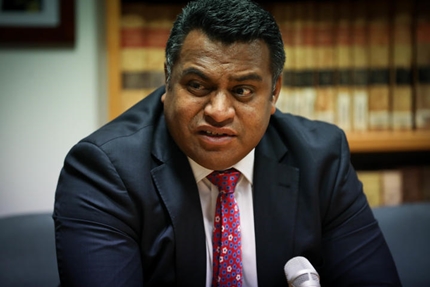 Minister of Justice Kris Faafoi thinks we have 'a world-class electoral system.' That must be why nearly 700,000 people decided not to vote in the 2020 General Election.

IMAGINE, IF YOU WILL, that Kris Faafoi is a used car salesman. The Justice Minister is trying to sell you a car. The vehicle concerned has had a brand new paint job, a new set of tyres have been fitted and all the upholstery inside has been replaced. Its looking pretty good. The only drawback, which Faafoi hasn't told you about, is that the engine is stuffed. Despite the gleaming appearance, this car is heading nowhere but to a permanent breakdown and the scrapyard.

Faafoi's second-hand car is a little like our electoral system. It looks fine - on the surface. Faafoi himself describes it as 'a world-class electoral system'. The problem for the Justice Minister though is that a helluva lot of people aren't as thrilled with our electoral system as he is. A huge chunk of the electorate no longer participate in that system. Indeed after almost a million people didn't bother to vote in 2014 the Electoral Commission was moved to comment:

'Turnout has been in decline in most developed countries over the last 30 years, but New Zealand's decline has been particularly steep and persistent.'

The disconnect with the electoral system is substantial. The engine of the system is stuffed but Faafoi merely wants to give the body work a bit of a spruce up. His just announced review of the country's electoral law will look at such matters as the length of the parliamentary term and the lowering of the voting age to sixteen.

None of this though will make the system any more democratic. Given that this review is designed to do little more than confirm the status quo but maybe with a few more bells and whistles added, there is no recognition that a large chunk of the electorate no longer vote because they don't like what's on offer on election day. Potential voters feel completely alienated from traditional political institutions.

Although she has been flirting with 'wokism' of late, Stuff journalist Andrea Vance voiced her dissatisfaction with the electoral system when she announced she was not going to vote in the 2020 general election. Wrote Vance:

'For the next few weeks, the party leaders will indulge us in a charade where they tour the country, pretending to have solutions. It's a hollow ritual, because for all their partisan sniping, the two major parties do not differ in any meaningful way.

'When Parliament returns these careerists will return to business as usual. Politics is the only business that doesn't suffer in a recession.

'It's a system built for failure: failure to deliver results in the public interest and failure to foster policy innovation. Worse still, it doesn't demand accountability for failure to fix these problems.'

Even if the Labour Government decides to introduce a four year term or lower the voting age to sixteen or make funding of the parties more transparent our 'representative democracy' will still remain a plutocracy, a political system ruled and dominated by a wealthy elite. As I wrote last year 'the hyper concentration of wealth in the hands of the few has corrupted and overwhelmed our 'representative democracy' to such an extent that it will do nothing to upset the economic and political interests of the one percent.'

Our so-called 'representatives' in Parliament no longer represent us or our best interests. But we now apparently face the prospect of them not representing us for four year terms instead of three. Excited yet?