NOT SO 'SUPER SATURDAY' 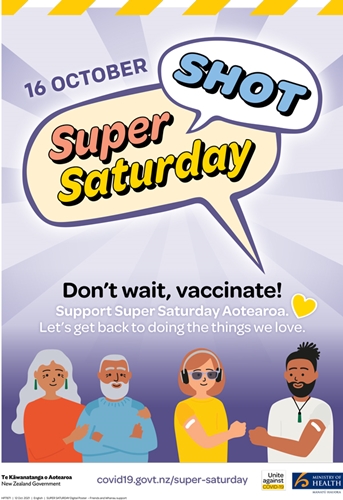 The media and celebrity driven 'fun' of 'Super Saturday' cannot conceal the fact that even with a ninety percent vaccination rate, people will still die.

SUPER SATURDAY may well be about getting more people vaccinated, but it also represents one large ideological campaign to convince people that the only way to effectively fight the delta virus is by being vaccinated.

Which isn't true. We know that lockdown's work. The Director General of Health Dr Ashley Bloomfield said as much last month when he observed that the drop in new coronavirus cases could be attributed to the level 4 lockdown.

It has only been because of the pressure applied by the business sector that the Labour Government has abandoned its elimination strategy and basically will let the virus rip - not just in Auckland but throughout the country. Here in the virus-free South Island, we're supposed to find that acceptable.

But, apparently, Labour's so-called 'progressive' supporters - as well as the mainstream media - are happy to see the virus spread. What a disgrace.

Jacinda Arden is fundamentally a feckless politician, with a ready excuse or justification for her regular backsliding. In the case of the delta virus, she claims that vaccinating the population - or most of it - is the only path to some kind of pre-virus normality. She says that vaccination is our 'ticket to freedom'. Yesterday, indulging in one of her folksy homilies she thinks people like, Arden said she was 'determined' to see people had a Christmas this year.

But despite Ardern's insistence that vaccination is our one path out of this crisis, people will still die. Jacinda Ardern and her Labour Government know that.

Te Punaha Matatini says 'that if the reproduction number is even slightly greater than 1, fatalities would be measured in thousands, despite high vaccine coverage.'

One of members of Te Punaha Matatini is Dr Siouxsie Wiles. A vocal supporter of the Governments' elimination strategy, she has rightly pointed that allowing the virus to circulate will hit working class communities the hardest, observing that 'the burden's not going to be felt equally'.

Undoubtedly the working class and the poor, of all ethnicities, are right in the firing line of this lethal virus. While the Labour Government might be inviting the country to join in the 'fun' and ''festivities' of 'Super Saturday' it cannot conceal the ugly truth that this Prime Minister and this Labour Government have decided that any 'collateral damage' from abandoning its elimination strategy is politically acceptable.