ELIZABETH HOLMES : LOOKS CAN BE DECEIVING 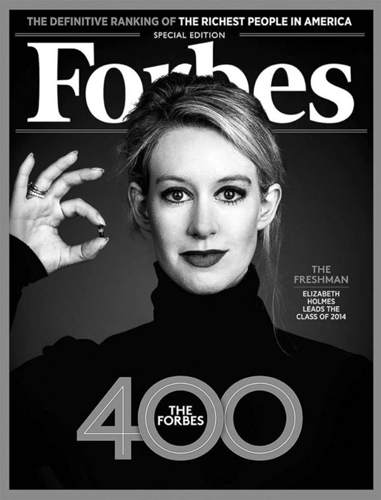 Elizabeth Holmes was once worth $4.5 billion. Now she's on trial for fraud and facing a lengthy stint in prison.

I'VE BEEN FOLLOWING the trial of Elizabeth Holmes currently into its third month in a courtroom in San Jose, California. The trial is a fascinating insight into good old American ambition and greed and, I'm guessing, destined to become a big Hollywood movie in the not too distant future.

At the age of just nineteen Elizabeth Holmes founded Theranos, a healthcare technology company. Her ticket to fame and fortune was her claim that she had developed breakthrough technology that  could quickly screen for hundreds of diseases using only a tiny dot of blood.

Some of America's uber rich alerted to the prospect of potential vast profits, flocked to invest in Theranos. Such was their eagerness to give Holmes millions of dollars, they did next to nothing in the way of due diligence. The new technology was based on a sleek black box that looked a little like a computer server - but no-one actually got to see it in action. Investors just had the assurances of Holmes that it worked. And she lied. Spectacularly.

But the 'breakthrough technology' made Elizabeth Holmes very rich. In 2015 she topped the Forbes list of America's richest self-made women  with an estimated worth of $4.5 billion. She was the cool and sexy face of American capitalism and entrepreneurship, courted by politicians like Bill Clinton and Joe Biden.

In 2016 Forbes still estimated Holmes to be worth $3.5 billion even though it noted that Theranos had '..been hit with allegations that its tests are inaccurate and is being investigated by an alphabet soup of federal agencies.'

Forbes was referring to a 2015 Wall Street Journal investigation by John Carreyrou that exposed that the lab machine was not all that Theranos claimed it to be. To cut a long story short, in 2018 Holmes  was charged with defrauding investors following the collapse of Theranos. Its estimated that investors lost in the region of $600 million. If convicted Holmes faces up to twenty years in a prison. In theory, at least.

Carreyrou, who is following the trial for his excellent Bad Blood podcast, says '..there's an entitlement to Elizabeth Holmes and her clan that you can't underestimate. There's a combination of self-righteousness and entitlement, and an absolute refusal to concede to mistakes or errors, much less fraud.'

In court her defence is pushing the line that Holmes was just a driven and ambitious young entrepreneur who worked long hours to make her vision come true, but failed in the end. And failure is not a crime, is it? Whether the jury will buy this argument is another matter altogether.

Of course much has been written and said about this trial and there's been a lot of speculation about just how Holmes got away with it for so long.  My own view is that you can't go wrong by referring to Karl Marx's 1844 essay 'The Power of Money'  Discussing the nature of money in bourgeois society, Marx observes:

'I, according to my individual characteristics, am lame, but money furnishes me with twenty-four feet. Therefore I am not lame. I am bad, dishonest, unscrupulous, stupid; but money is honoured, hence its possessor. Money is the supreme good, therefore its possessor is good. Money, besides, saves me the trouble of being dishonest: I am therefore presumed honest. I am brainless, but money is the real brain of all things and how then should its possessor be brainless?....Does not money, therefore, transform all my incapacities into their contrary?'

Crowned America's youngest self-made billionaire by 2014 and feted by business and the media, vast wealth made Holmes everything she wasn't : Honest, scrupulous, intelligent.

For a time she was unstoppable and we can only be grateful that the only people left out of pocket and thoroughly embarrassed were equally unpleasant characters like media mogul Rupert Murdoch, the Walton family (owners of Walmart), and war criminal Henry Kissinger.

I agree with Ben Burgis who writes in Jacobin that's it's next to impossible to have any sympathy for 'the ghouls' that Holmes screwed over. Burgis concludes : '...as I read about their anguish over their squandered millions, I can't help but feeling just a little bit sorry that she was exposed before they could squander even more.'

Elizabeth Holmes really did kick America's rich where it hurts the most. We can thank her for that, I think.