JACINDA ARDERN : THE NEXT LEADER OF THE NATIONAL PARTY? 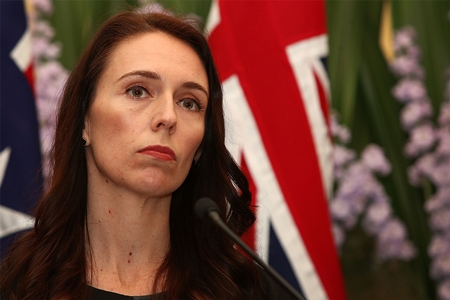 Who will be the next leader of the National Party? Mark Mitchell? Simon Bridges? Shane Reti? Christopher Luxon? What about Jacinda Ardern?

IF IT WASN'T FOR THE FACT that she happens to be the Prime Minister and in another political party, Jacinda Ardern could well be a candidate to be the next leader of the National Party.

She has the necessary qualifications. Throughout her political career she has been loyal to the interests of 'the free market'. And the policies of her Labour Government have always been framed to assist the business sector while ordinary folk have been forced to live off the crumbs that fall from the table of the rich and powerful. They call it 'trickle down theory'.

The current pandemic has highlighted the Labour Government's desire to protect the interests of business with a gigantic transfer of wealth in its direction. Last year the Labour Government shovelled some $13 billion into the clamouring hands of business while ordinary folk got next to nothing. Commentator Bernard Hickey observed that Labour provided 'the biggest shot of cash and monetary support to the wealthy in the history of New Zealand, while giving nothing to the renters, the jobless, students, migrants and the working poor who mostly voted it in.'

There is, of course, a difference in the rhetoric of Labour and National. And Jacinda Ardern is certainly one for the big talk. But the rhetoric has not translated into significant differences in  public policy. And when it has threatened to do so, Ardern has quickly reversed direction. This is especially the case now since the Labour Government is obviously pitching its policies at a slice of the electorate that has normally favoured National.

We've now reached the point when Labour and National release shared market-led housing policy. Indeed former National leader Judith Collins said that she 'wrote to the Prime Minister proposing that National and Labour work on a bipartisan and urgent solution to the housing crisis.' The result will be the further intensification of urban housing that will be a boom for property developers and financiers, degrade the living environment and produce next to no affordable housing.  But 'the market' prevails.

It is the convergence of policy between Labour and National that has produced the 'political equilibrium' of the past three decades. Without such equilibrium there would be radical shift in policy every time the party out of power won a election. Instead, after nine years of a National Government, we saw a seamless transition to a Labour Government. And nothing has changed.

Such remarkable political equilibrium is normally the preserve of one party dictatorships - like China for instance - but New Zealand's political and economic elite has managed to corrupt our representatives democracy to the point  that none of the parliamentary parties are prepared to challenge the status quo. Bank economists have applauded such political maturity, arguing that the flipping back and forth on policy would produce the kind of political instability not conducive to the best interests of the business sector.

If you watched any of the fracas surrounding the removal of Judith Collins as National Party leader you would think that the fate of the entire country hung on who National chose next as its leader. While the next general election is inevitably shaping up to be yet another personality-driven election this only goes to obscure the reality that policy differences  between the two major political parties is minimal and will certainly not upset the interests of those who benefit from the status quo.

Ordinary New Zealanders face a simple but very stark question: can we continue to have faith in a political system whose primary motive is to service and protect the interests of the one percent?