WHY THE LIBERAL LEFT HATES THE WELLINGTON DEMONSTRATORS 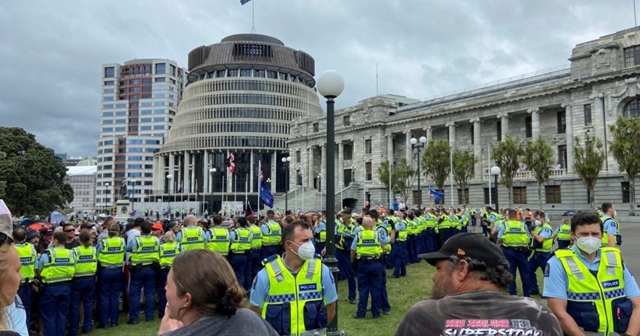 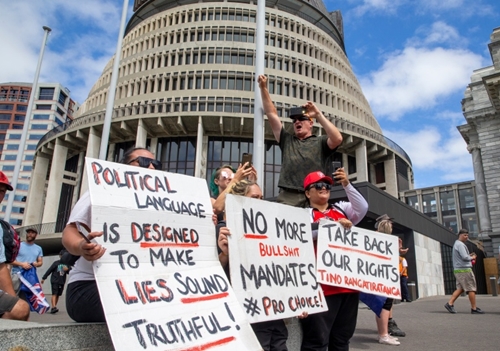 Maybe what the liberal left fears about the current Wellington demonstration is that it might grow into a independent working class movement that rejects its traditional 'representatives'.

IN HIS EAGERNESS to see the back of the demonstrators in front of Parliament, Morgan Godfery got ahead of events and announced on Thursday: 'And so it ends as it began - in farce.' Judging from his comments in his Guardian column Godfrey anticipated that the police would soon 'remove the convoy-cum-campers'. But, unfortunately for him, the demonstrators were still there on Friday night. In fact, the numbers had grown and, in the social media, news was being circulated that further 'reinforcements' would be arriving Saturday morning.

Godfery's desire to see the demonstrators quickly 'removed' from Parliament grounds has also been shared by another Labour friendly commentator Chris Trotter. His attack has been directed both at the demonstrators and the police. Indeed his column for The Daily Blog is largely an intemperate rant against the police for not getting tough with the demonstrators. He also dishonestly characterises the demonstration as 'anti-vaxx' - which it isn't.

Trotter's 'solution' is to 'unleash Hell' or at least, 'unleash police batons' against the demonstrators. 'Let's see what a state of enforcement action looks like' tubthumps Trotter, who now won't be able to credibly complain when the police batons rain down on a demonstration he does approve of.

Why do Godfery and Trotter want the police to get tough? Ostensibly its because they both think the demonstration is 'violent' or at least 'potentially violent'. But its all pretty vague and nebulous.

In the case of Godfery, he shares the opinion of TVNZ's Jessica Mutch-McKay who has described the demonstration as 'unsafe' - whatever that means. According to Godfery 'No one owes solidarity to a group threatening violence against politicians, journalists, academics, and health workers.'

But a few individuals making inflammatory comments and carrying inappropriate placards is not evidence of the demonstration's violent intent. But it is an attempt by Godfery to justify the use of police violence against the protesters. As I've said before, woke liberalism and authoritarianism walk hand in hand. They certainly do in Godfery's case.

While Morgan Godfery has been making his claims about the Wellington demonstration from faraway Dunedin, Chris Trotter has been making similar claims from faraway Auckland. According to him innocent pedestrians have been harassed by demonstrators. He's obviously read this on a news website and provides no further details. It probably has occurred at some stage but a few mad individuals mouthing off does not justify the condemnation of an entire demonstration and it certainly does not justify the use of police violence.

And the only violence that Trotter can point to is demonstrators reacting 'violently to all attempts to move them on'. But what he describes as 'violence' was actually the scuffles that broke out when police started pulling demonstrators out of the crowd.

Newstalk ZB's Barry Soper, hardly a radical of any political flavour, has provided a more level-headed assessment of the demonstration : 'The protesters are not threatening, the ones I spoke to didn’t agree with me but we all have the right to our opinions. Of course there are a few rat bags but they’re the minority.'

Of course, unlike Godfery and Trotter, Barry Soper has actually been talking with the protesters rather than just talking about them.

This is a working class demonstration, however clumsily it might be articulating its demands and despite of the fringe elements that might also be active. Perhaps what representatives of the 'establishment left' like Godfery and Trotter fear the most is the stumbling emergence of a working class movement that is not prepared to follow the orders of individuals and organisations that have consistently betrayed working people for the past three decades.  John Minto suggests:

'Understanding how we got here is important. Most of those protesting are working class New Zealanders who have experienced 40 years going backwards economically and socially under Labour and National governments. They lack the traditional working-class leadership provided in the past by strong unions and even, in the distant past, the Labour Party. They have developed, quite rightly, a deep distrust of politicians and are therefore susceptible to the masses of misinformation in what one commentator calls the 'rivers of hate' on social media.'

The insertion of a potential new force into the normal process of politics, routinely dominated by the politicians and their messengers like Chris Trotter and Morgan Godfery, is making the political establishment nervous. So, according to some, the 'green shoots' of an independent working class movement must be stamped out before it begins to grow...