The very same corporate Democrats, now posing as the champions of women's rights, are the very same people who opened the door to a Trump presidency in 2016 and the installation of three conservative justices on the Supreme Court. They all voted to overturn Roe v Wade. 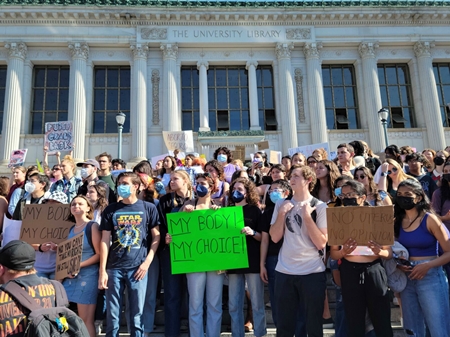 WHILE PRESIDENT JOE BIDEN has attacked the decision of the U.S. Supreme Court to overturn Roe versus Wade, describing it as a 'tragic error' and 'a sad day' for the United States, he needs to look a little bit closer for home to locate those who are really responsible for this travesty.

It was the Democratic Party elite who opened the door to a Trump presidency and the tilting of the political balance on the Supreme Court. The Row v Wade decision is further fallout from the Democratic Party establishment's determination to put forward the disliked Hilary Clinton as the party's presidential candidate in 2016. It deliberately sought to undermine the campaign of Bernie Sanders despite the fact that the polls routinely showed that he was vastly more popular with the American people than either Clinton or Trump. The ugly reality is that the Democratic Party elite, the same elite that maintains control over the party now, feared the left wing politics of Bernie Sanders more than they feared the right wing demagoguery of Donald Trump.

Donald Trump over his four-year term was able to nominate three justices, or one-third, of the Supreme Court -- all of whom sided with the majority in striking down the 1973 Roe v. Wade decision.

The bitter irony is that the very same corporate Democrats who sought to undermine the campaign of Bernie Sanders are now posing as the champions of women's rights. So we have centrists like Nancy Pelosi, who has made no secret of her dislike for Bernie Sanders and his heir apparent Alexandria Ocasio-Cortez, declaring that she's 'personally overwhelmed by this decision' and declaring that the Democratic Party will 'fight' on the issue of women's rights at the midterm elections in November.

But, as Abby Martin of The Empire Files has observed, 'useless Democrats like Pelosi will only use the war on women's rights to fundraise, not fight'.

'Roe was only enshrined because of a militant feminist movement and we can do it again,' says Martin. 'Instead of letting them corral you into an unjust political system that makes you feel the only power you have is to vote, we need to look at our own potential to organise and defend our rights.'