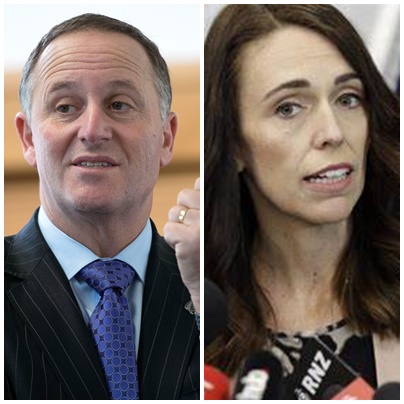 The political convergence of Labour and National is complete. Jacinda Ardern has turned into John Key.

WE LIVE in a superficial age where New Zealand television does very few long form interviews anymore and certainly not in prime time. Instead it prefers the easily digestible morsels of infotainment served up by shows like 7 Sharp and The Project. Blancmange for the mind.

The only shows that continue to conduct interviews that are longer than five minutes are Q + A on TVNZ  and The Nation on TV3. And both these shows are buried deep in the weekend  schedules and have a limited audience as a result.

So it was in this current affairs wasteland that Jack Tame interviewed Prime Minister Jacinda Ardern for Q+A on Sunday morning. It's a indication of how insulated this Prime Minister has become that her office has granted Q+A just two opportunities to interview her this year and this was one of them. The interview was no more than half an hour, including commercial breaks.

Jack Tame can be a good interviewer on his day and it wasn't his fault that he was confronted with a Prime Minister who was, as usual, determined not to answer any questions she didn't like. Ardern's favourite tactic, which I think we're all familiar with now, is to reframe a question and answer that instead. And she'll attempt to answer her own question at great length - basically saying nothing in the process but chewing up valuable interview time nevertheless. Attempts to bring Ardern to order by the interviewer are met with pained expressions and a haughty request that she should be allowed to continue with her (non) answer.

She gets away with it because most of the interviewers are of a liberal disposition and friendly to her politics. Even someone as formerly as incisive as RNZ's Susie Ferguson loses her bearings when it comes to Ardern.

Tame though is obviously familiar with Ardern's evasiveness and repeated the same questions until Ardern was forced to address them. But it was a struggle and resulted in an unsatisfactory interview with the Prime Minister being less than forthcoming. Tame did his best but he might have felt he had been grappling with a slippery eel and came out second best.

But, nevertheless, among the debris, there were some revealing insights. Perhaps the most disappointing  for the deluded who continue to cling to the futile hope that Ardern will prove to be a progressive Prime Minister was her further retreat from the big targets she set herself during Labour's 2017 election campaign.

When confronted by Tame that her Labour Government had failed to meet its objectives on issues such as child poverty (code for poverty in general)) Ardern said that these goals remained 'aspirational' and she would not be retreating from her 'aspirations'. Despite the bravado, all Ardern has done is kick the can further down the road. And it'll eventually become someone else's problem.

Another Prime Minister, John Key, used to talk about the aspirational nature of his National Government. In a 2016 speech he declared:

'For me, politics is about the ability to make change for the betterment of all New Zealanders. It’s about challenging us all to dream how great our country can be and then setting out to achieve it....As New Zealanders, we have grown up to believe in and cherish an egalitarian society. We like to think that our children’s futures will be determined by their abilities, their motivation and their hard work. They will not be dictated by the size of their parent’s bank balance or the suburb they were born in.'

This speech could of easily been given by Jacinda Ardern. It talks of a better life for all New Zealanders in a society that cherishes and protects its 'egalitarianism'. It denies that people's futures might be constrained on the basis of something as sordid as economic class. Ardern, the eternal centrist, would not disagree with any of this.

But John Key was roundly attacked by Labour Party activists for the vacuousness of his aspirational politics. Labour Party cheerleader Greg Presland accused Key of 'indifference to the plight of the poor and homeless'.  And diehard Labour Party supporter Stephanie Rodgers wrote:

'But this week John Key has looked up and everyone’s staring at him saying “WTF, mate? People are living in cars? We’re putting them up in motels so their kids can sleep in a bed for once and we’re charging them for the privilege? What the hell is going on and why aren’t you doing anything about it?'

But its exactly these kind of questions that aren't being asked by Labour supporters of Jacinda Ardern.  A different set of standards, apparently, applies to her.