JOHN KEY: BAILING OUT THE CORPORATE SECTOR IS 'AN OPTION'

Just a month or so before the 'How Can We Save NZ Capitalism' conference - euphemistically called a 'Jobs Summit' (see previous post) - Prime Minister John Key has come out and said that the government was prepared to bailout any 'strategically important company'.

Key said yesterday: “if we got into a situation where a New Zealand corporate couldn't raise money in its own name, couldn’t seek the level of funding that was required from the banks, and we deemed it in the best interests of the country for the government to step in and provide those funds on a temporary basis. It’s always an option that the Crown could bail out or lend to the corporate sector.' 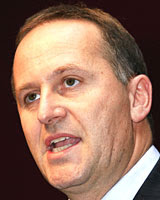 And what exactly is a 'strategically important company'? Probably because he's making this up as he goes along, Key declined to answer this question. He did say it would apply to a 'limited' number of companies but this could mean just about anything.

And what level of funding would the government be offering? And what does 'temporary loan' mean exactly? And where's the money coming from?

Yes, its welfare for the wealthy.