NO ANSWERS FROM NORMAN 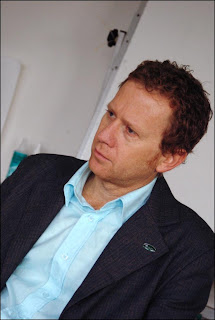 Although the late Rod Donald began the process, it has been co-leader Russel Norman who has been largely responsible for transforming the Green Party into just another pro-market parliamentary party, albeit with a mild green hue.

He has been aided and abetted by his fellow co-leader Jeanette Fitzsimons and the other parliamentary MP's, including former 'lefties' Keith Locke and Sue Bradford.

Norman today gave his annual 'State of the Planet' address and he used the occasion to talk about the global capitalist meltdown. It was full of the empty puffery that has come to characterise Norman.

The optimistic and/or naive among us might of thought that the capitalist crisis might of shaken Norman's belief in the 'power of the market' (his words) but, I'm sorry to say, it hasn't. He's still flogging the dead horse that is the 'free market'.

Rather than offering an economic alternative to the market policies that have ended in global disaster, little Russel's advice is for the government to be 'environmentally friendly' in it policies to deal with the fallout from the capitalist meltdown.

Unable to admit that neo-liberalism is well and truly stuffed, Norman's 'big ideas' include urging the government to only buy fuelefficient cars for its fleet and that 'we' should aim to cut oil consumption by one quarter in the next decade. This is an 'idea' that Norman has picked up from Barack Obama.

The Green Party could have adopted a consistent anti-market viewpoint and embraced the eco-socialist movement, but instead they decided to embrace market environmentalism.

Norman's plaintive cry for the National-led government to adopt 'environmentally-friendly' policies completly ignores the fact that the market is inherently environmentally unfriendly. It is the nature of capitalism to exploit and destroy the enviroment in the pursuit of profit.

For Norman to suggest otherwise throws him into the same 'free market' camp as Rodney Hide or Bill English.
Posted by Steven Cowan on Sunday, January 25, 2009