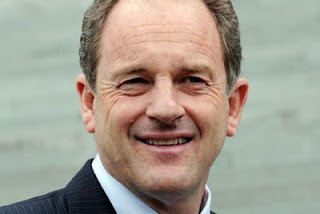 David Shearer and Labour are offering nothing more than the continuance of the neoliberal madness.

Ladies and gentlemen, I give you yet  another reason  for not supporting the Labour Party - David Shearer's 'State of the Nation' speech.

Here was an opportunity for the Labour leader  to clearly, and without obfuscation,  offer an economic alterative to the neoliberalism that has wrecked the New Zealand economy and devastated civil society.

The neoliberal economy has failed yet Shearer had nothing to offer other  that the empty  claim that he  and Labour could manage the free market economy better than National. Where have you heard that before recently?  That' right, - from Phil Goff, who Shearer replaced

Shearer said the country was looking for a government that would roll up its sleeves and back them. 'I'm refreshed, I'm fired up and I'm raring to go.'

But what is it that Shearer - sans long sleeves - is  raring to have a  go at?  It isn't to overturn a failed economic model  but to tinker with it. Shearer will still  be spending a lot of time  in the corporate boardrooms, ensuring the ideologues  of neoliberalism that Labour isn't about to do anything....radical. It won't be rocking the boat.

Shearer  had a chance to speak for the victims of an unjust  economic system but he didn't. He had the opportunity to express  anger about what is happening to ordinary people  in this country but his only 'battle cry' was that 'Labour can make the free market work!'. The man seen enthusiastically applauding Shearer was Green co-leader Russel Norman.

Shearer could  have said that 'enough is enough' but instead he said 'it'll be business as usual'.

Let's face it,  Labour has long forgotten about what it means to be a party of the left.

None of the parliamentary politicians  represent us, none of them speak for us, they only have contempt for us. We are disenfranchised. The depressing truth is that we have allowed ourselves to be governed by rich, corrupt politicians who's only agenda is to make the poor poorer and the rich richer.
Posted by Steven Cowan on Monday, January 28, 2013