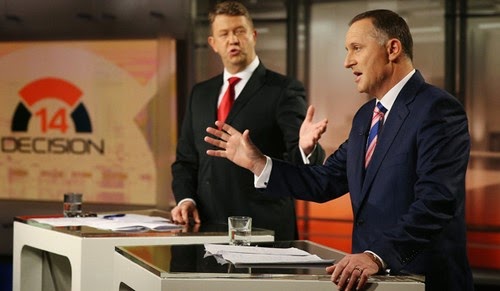 John Key and David Cunliffe debate who will be a better manager of the free market economy. The loser is all of us.

WHILE I EXPECTED LITTLE  FROM EITHER John Key or David Cunliffe, watching the third 'Leaders Debate' was still dispiriting. It had me reaching for the remote on several occasions. I persevered only so I could write this.

This wasn't so much a contest of ideas, of ideologically defined visions of alternative New Zealand's, but rather a debate about management styles. You can either have John Key continuing  to run New Zealand Inc or you can give David Cunliffe a go. Either way we are still  wrapped  in the neoliberal straitjacket. When you so desperately want someone to go charging the citadels of capitalist power, we are instead expected to make do with fiscally responsible  David Parker and his marker pen and whiteboard, calculator at the ready. Big ideas have been reduced to technical arguments about tax.

Cunliffe tried to get passionate - and it looked scripted to me -  about  decreasing child  poverty but I couldn't even detect a  whiff of even the mildest  Keynesianism  in the policies he outlined. For business interests,  Cunliffe and the Labour Party will be a pleasure to work with - but it'll be thin gruel for most of us.

Labour supporters might wax lyrical abut an increase in the minimum wage but Labour also plans to raise the retirement age, has no intention of stopping deep sea exploration for oil and has been conspicuously silent about how it will improve the lot of welfare beneficiaries - other than vague calls abut creating more jobs.  For working people and the poor there are a lot of booby prizes in Labour's cupboard but, apparently, we're supposed  to just take our medicine in order to get rid of John Key.

It's a stark indication of the lack of choice in this election that Green co-leader Russel Norman is now talking of how the Green's could work with the National Party. Wow. That's fighting talk.

And in the entire debate there  was not one mention of perhaps the pressing issue of our time - climate change and the deepening ecological crisis.

Yet only yesterday it was  reported that a surge in atmospheric CO2 saw levels of greenhouse gases reach record levels in 2013.

The World Meteorological Organisation (WMO) annual Greenhouse Gas Bulletin  has reported that  globally averaged amount of carbon dioxide in the atmosphere reached 396 parts per million (ppm) in 2013, an increase of almost 3ppm over the previous year.

Michel Jarraud, secretary general of the WMO. had this stark warning: "We must reverse this trend by cutting emissions of CO2 and other greenhouse gases across the board.We are running out of time."

As Naomi Klein writes in soon to be published book This Changes Everything,  the root of the planet's crisis  is a predatory economic system, driven by the motor of profit. While Naomi Klein and progressive political currents speak of transforming the economic order  David Cunliffe and John Key talk merely of pulling the levers on a machine that is already out of control and which threatens to take us all down with it.
Posted by Steven Cowan on Thursday, September 11, 2014