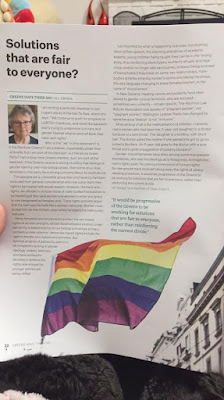 Several high profile figures, including Sandra Coney and Maire Leadbeater, have put their names to an open letter condemning the treatment that longtime Green Party member Jill Abigail has received from her party. It has called for Green co-leaders James Shaw and Marama Davidson to issue an apology to Abigail.

THE CONTROVERSY OVER Jill Abigail's comments on transgender rights and the pulling down of her article in the Spring issue of Te Awa magazine has deepened with a strongly worded open letter issued by Speak Up For Women.

Speak Up Women was formed because of a 'shared concern about the impact of transgender politics (including self-ID) on the rights of women and girls..' It says that traditional women's groups have become focused heavily on gender identity, leaving a lack of services and advocates for women.

The group states on its website : "We are dismayed by the way in which women’s voices, both here and overseas, have been silenced by slurs, smears and targeted harassment campaigns. It is not transphobic or bigoted to ask questions, to advocate for women and girls, or to draw attention to male violence. Where there is a conflict between transgender rights and women’s rights we believe it is critical that there is a need for respectful open discussion and that women’s concerns are listened to.'

The open letter rejects Green co-leader Marama Davidson's claim that Abigail's article puts 'trans rights to exist up for debate”and it condemns 'the public vitriol' that Abigail has been subjected to from members of the Green Party. It asks that Marama Davidson and fellow Green co -leader James Shaw apologise to Abigail 'for the defamatory comments and bullying she is being subjected to by members of the party and call for the abuse to stop immediately.'

The letter goes on to say ;

"Many of us are Green members or former Green members and we are seriously concerned at the refusal of the Green Party to hear the concerns of women that our rights are being impacted by the rapid adoption of gender identity ideology.

We echo Jill’s sentiment that “it would be progressive of the Greens to be working for solutions that are fair to everyone, rather than reinforcing the current divide”.

The full letter can be read here.
Posted by Steven Cowan on Saturday, September 07, 2019