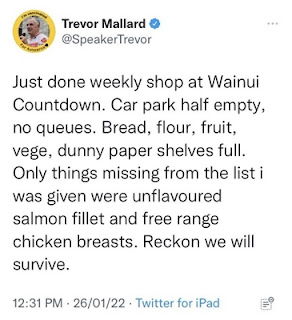 Many New Zealanders are struggling just to put food on the table each day. But the Speaker of the House Trevor Mallard has been confronting his own food crisis as well...

YOU THINK you've got it tough? Think again. Not only has the Prime Minister been forced to postpone her wedding because she was reluctant to cull her guest list and risk offending people, but the Speaker of the House has been facing his own desperate times.

Trevor Mallard told his Twitter followers yesterday that he'd just done the weekly grocery shop at the Wainui Countdown but had been unable to buy any 'unflavoured salmon fillets and free range chicken breasts.' Traumatic stuff indeed. But Mallard, obviously inspired by the spirit of self sacrifice displayed by his leader, tweeted; 'Reckon I'll survive.' What a trooper. 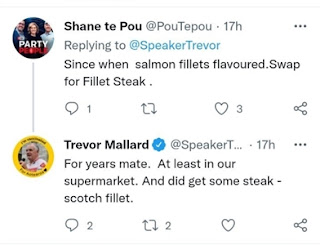 And longtime Labour Party activist and NZ Herald columnist Shane te Pou had some sound advice for Trev. 'Since when salmon fillets flavoured,' he tweeted. 'Swap for Fillet Steak'.

Mallard replied that he had managed to get some 'steak  - scotch fillet'. And so economically priced too, at just $38.90 a kg. Good to see Mallard practising the same 'fiscal discipline' that his Labour Government has imposed on the rest of us..