TO THE END : 'HOW IMPOSSIBLE THINGS BECOME POSSIBLE' 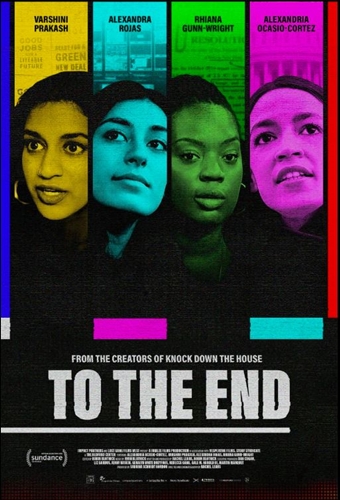 Rachel Lears 2019 documentary Knock Down the House received wide critical praise. Her new documentary, To The End, focuses on climate change and the Green New Deal.

IN 2019 director Rachel Lears won popular critical praise for her documentary Knock Down the House. It followed the fortunes of four women running for Congress in 2018. One of those four women was socialist  Alexandria Ocasio-Cortez and the only one to eventually overturn the status quo. In what was regarded as a 'shock victory' by the corporate media, she soundly defeated the ten term Democratic incumbent Joe Crawley in the midterm primaries. It would be fair to say that, while Knock Down The House is a first class documentary, the political success of AOC also guaranteed the documentary's success as well.

Three years later Rachel Lears new documentary, To the End, has just screened at the Sundance Film Festival. Following the template laid down by Knock Down The House, the documentary follows four women activists campaigning on the crucial issue of climate change. The focus of attention is the Green New Deal (GND), a manifesto that aims to transform an American capitalist economy continuing to chew up the environment.

As the public face of the GND, Ocasio-Cortez features prominently but she's also joined by Varshini Prakash from the youth-driven Sunrise Movement, Alexandra Rojas from action group Justice Democrats, and Rhiana Gunn-Wright of the Roosevelt Institute and who co-wrote  the GND policy document with AOC.

Lears says the documentary began to develop after talking with AOC:

'I was interested in looking at climate and that really sort of galvanized when the IPCC report came out in 2018, which is sort of what we start the film with. That’s the report that basically said that we need rapid, far-reaching unprecedented changes before 2030, and that these changes are technically and feasibly possible. It’s a question of political will, right? So when a group of apolitical scientists is framing this as a question of political will, political courage, I sort of had a light bulb go off — “Hey, I made films about that, about how impossible things become possible.” And I was already talking with Alexandria Ocasio-Cortez and her team about what they were planning to do next, so we started talking about this project, and it grew to include the other three amazing women that are featured as well. At the very beginning, these were the organizations and individuals that were really pushing the Green New Deal as a concept. And, you know, the Green New Deal is not a piece of legislation, it’s a framework for understanding this transition and how we could actually do what the scientists are saying we need to do.'

To The End opens with the well-known quote from the Italian Marxist Antonio Gramsci:  'The crisis consists of just this: The old world is dying and the new world cannot quite be born. In the meantime, all kinds of dreadful things are happening,”  But while, yes, 'dreadful things' continue to happen, Lear hopes the documentary provides inspiration and sustains belief that real change is possible - even if the political establishment is determined to prevent it.

'I want this film to give people a chance to emotionally process the existential anxiety of this historical moment. Climate change and the interlocking crises that are visible everyday — the pandemic, inequality — all really provoke a sense of staring into the abyss, and it’s worse when we’re so isolated. What I hope people will take away from the film is that that sense of being overwhelmed doesn’t have to lead to cynicism. There are ways for individuals to be part of historic change. It’s not easy, the road is long, but you can be part of it.'