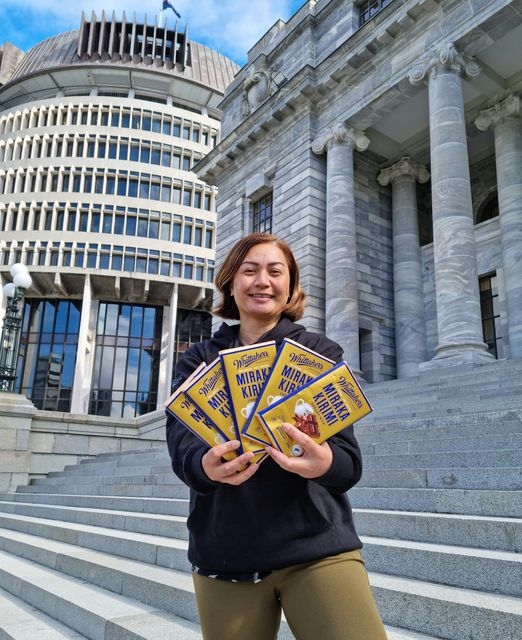 Green co-leader Marama Davidson displays a blatant disregard for the plight of the poor.

GREEN CO-LEADER Marama Davidson has been doing some free promotional work for Whittakers Chocolate. She posted this photo to Twitter yesterday. Although the Cabinet Manual says that 'No Minister should endorse in any media any product or service,' Davidson could probably argue that she is an Associate Minister for Housing outside of Cabinet so the Cabinet rules don't apply to her. But this is a marginal call.

Davidson herself however has tweeted  that she 'can promote organisations who use te reo on everything'. The difficulty here is that she is principally promoting a product and not an organisation. So this is still a marginal call.

But in her capacity as an Associate Minister of Housing (with special responsibility for homelessness) Davidson has generously supplied Whittakers with plenty of free publicity. Whittakers, of course, paid big money to get British celebrity chef Nigella Lawson to front its television commercials.

Davidson says she bought the chocolate herself which means there would little change out of $30 or so. The irony is that many people, of all ethnicities, cannot afford the luxury of chocolate. And Whittakers Chocolate doesn't come in the parcels down at the foodbanks.

It is incongruous, to say the least, that Davidson, who has a ministerial brief to assist some of the poorest people in the country, should be promoting a brand of chocolate. There are tens of thousands of people either living in emergency accommodation, sleeping rough, or living in cars, garages and on couches across New Zealand. A brand of chocolate labelled in te reo is the least of their concerns.

New Zealand has one of the highest levels of homelessness in the OECD.

Last month it was reported that the number of children living in cars had increased from 51 in December 2017 just after Labour came to power to 228 in June this year. Much of this increase has occurred under Davidson's watch.